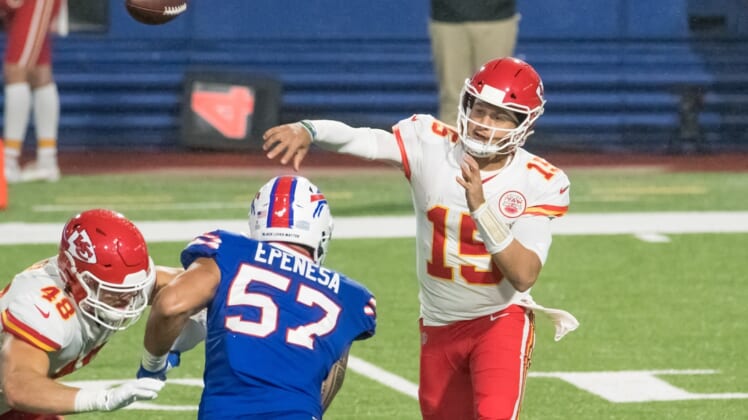 BetRivers.com is offering the Over/Under at 54.5 points, with the public nearly split evenly with 51 percent of the bets and handle on the Under.

Patrick Mahomes has been cleared to play on Sunday

The Bills enter the game riding an eight-game winning streak and have covered the spread in four of their past five games at BetRivers.com, while the Chiefs have not covered since the first day in November.

Mahomes announced Friday that he had cleared the concussion protocol and also said the toe injury that was bothering him against the Cleveland Browns in the divisional round was “feeling a lot better.”

Meanwhile, the Bills’ Josh Allen is playing at a level equal to any quarterback still competing in the postseason.

Ever since a 26-17 loss to the Chiefs in Week 6, the Bills have rolled to 11 wins in 12 games, including eight straight, to gain their first AFC Championship appearance since the 1993 season.

Allen’s steady improvement with the Bills rode a huge uptick this season when he recorded eight 300-yard passing performances.

“He’s poised. I’ve never seen him overly excited,” said wide receiver Stefon Diggs, whose All-Pro season included NFL highs of 1,535 yards and 127 catches. “For him putting his head down and gaining actual (rushing) yards, things like that go far with us.”

If the matchup comes down to key defensive stops, consider that Buffalo has allowed touchdowns on just two of eight red-zone situations in the playoffs. Taron Johnson converted one into a 101-yard pick-six in the divisional-round win against Baltimore.

As for Kansas City, it ranked last in the NFL in red-zone defense, allowing a touchdown rate of 76.6 percent. Yet the Chiefs have held nine opponents to 20 or fewer points.

Two Chiefs playmakers, wideout Sammy Watkins (calf) and running back Clyde Edwards-Helaire (ankle), appear to be back after missing the divisional round. Both players are listed as questionable, as are running back Le’Veon Bell (knee), and cornerbacks Bashaud Breeland (concussion/shoulder) and Rashad Fenton (foot).