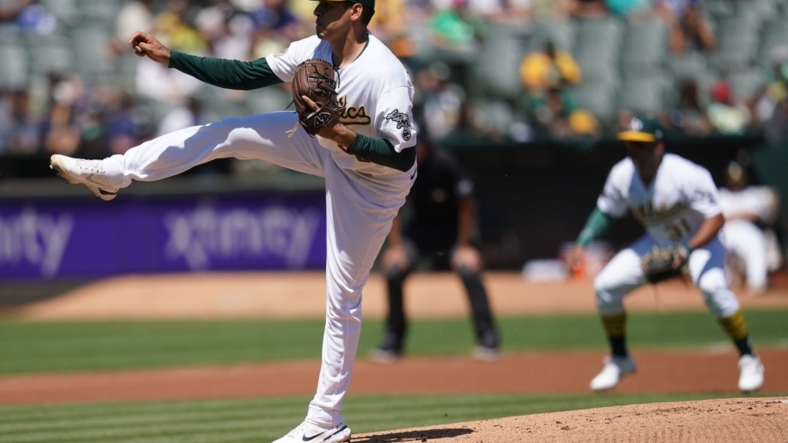 Right-hander Adrian Martinez responded to a promotion from Triple-A by pitching effectively into the sixth inning, Dermis Garcia drove in two runs with a pair of singles and the Oakland Athletics salvaged a four-game series split with the visiting New York Yankees on Sunday afternoon with a second straight win, 4-1.

Stephen Vogt produced his second big hit in two days and four relievers combined with Martinez on a four-hitter, helping the A’s break even on a 10-game homestand.

For the second straight day in his Northern California homecoming, Aaron Judge failed to hit his 50th home run of the year, going 0-for-4 with three strikeouts.

Pitching in the majors for the first time in three weeks, Martinez (3-3) limited the Yankees to three hits and one run in 5 1/3 innings. The rookie walked two and struck out a season-high six.

Facing the Yankees for the first time, the 25-year-old took a no-hitter two outs into the fifth before yielding a single to Aaron Hicks. A wild pitch and Kyle Higashioka’s RBI single then produced New York’s first run, getting the visitors within 4-1.

Martinez was pulled one out into the sixth after giving up a single to Giancarlo Stanton, and A’s relievers Sam Moll, Joel Payamps, Domingo Acevedo and A.J. Puk closed the deal from there with 3 2/3 innings of one-hit ball. Puk registered his fourth save with a 1-2-3 ninth that featured two strikeouts.

Oakland wasted no time jumping on Yankees starter Clarke Schmidt (5-3), scoring twice with two outs in the first on an RBI double by Vogt and Garcia’s first run-scoring hit.

Vogt was one of the heroes of Saturday’s 3-2, 11-inning win with a two-run, game-tying homer in the last of the 10th.

The A’s did the rest of their scoring in the third on a double by Nick Allen, a run-scoring single by Tony Kemp and, two outs later, Garcia’s second RBI single.

Playing in just his 10th big-league game, the 24-year-old Garcia’s two RBIs matched his previous total for the season

Schmidt lasted just 4 1/3 innings, charged with all four Oakland runs on eight hits. He walked one and struck out a career-high seven.

Seth Brown joined Garcia with two hits for the A’s, who out-hit the Yankees 8-4.

The Yankees did not have an extra-base hit and lost for the 16th time in their last 24 games.