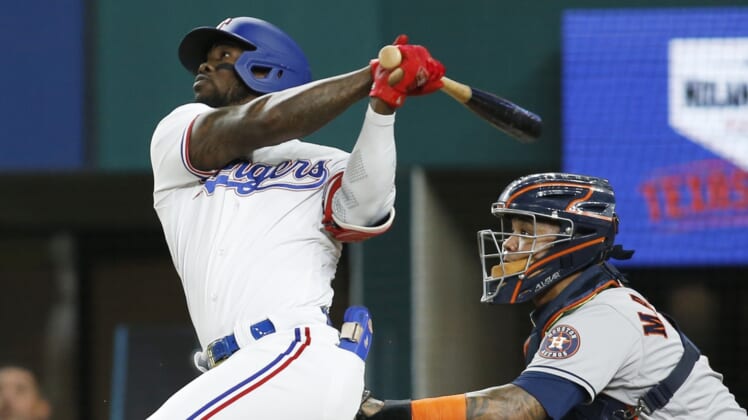 Jordan Lyles threw seven shutout innings and Adolis Garcia matched the club record for home runs by a rookie as the Texas Rangers pounded the Houston Astros 8-1 on Tuesday in Arlington, Texas.

Lyles (9-11) entered with the second-highest qualifying ERA (5.43) in the majors yet produced his second consecutive stellar outing. He allowed three hits and one walk with seven strikeouts.

After allowing one run over seven relief innings at Arizona on Sept. 7, Lyles picked up where he left off against Houston. He induced inning-ending, double-play grounders from Carlos Correa and Jose Altuve in the first and third, respectively, before allowing just two more baserunners.

Lyles hit Astros center fielder Jose Siri with a pitch with two outs in the fifth. He responded by retiring the final seven batters he faced, including striking out the side in the sixth. Lyles, 0-1 with a 7.84 ERA in two prior starts against the Astros in 2021, threw 61 of his 98 pitches for strikes.

Astros right-hander Zack Greinke (11-6), making his first start in more than two weeks following a stint on the COVID-19 injured list, and he allowed just two hits through the first five innings.

However, both of those hits were two-run home runs, the first coming from Nathaniel Lowe with two outs in the first inning. Lowe followed a one-out walk to Isiah Kiner-Falefa with a 440-foot blast to right-center field that spotted the Rangers a 2-0 lead.

After Kiner-Falefa reached via a one-out error by Correa at short, Garcia slugged his 30th homer to center. He matched the record set by Pete Incavilia in 1986 and finished the night 3-for-4 with two runs.

The bottom fell out on Greinke in the sixth when the first four batters reached safely, capped by DJ Peters’ 12th homer, a three-run shot to center.