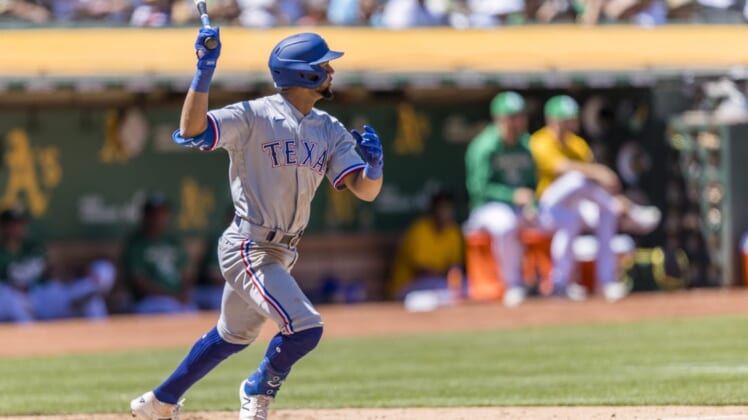 Adolis Garcia had a home run among four hits, Jonah Heim collected three doubles and left-hander Martin Perez coasted through seven innings Sunday afternoon as the visiting Texas Rangers salvaged one win in their three-game series against the Oakland Athletics with an 11-8 thumping.

Leody Tavares was a third Ranger with three or more hits with a double and two singles as part of a 16-hit assault on A’s All-Star Paul Blackburn (6-6) and two relievers.

It took just four batters for Texas to take a lead for good when Heim, who was dealt by the A’s to the Rangers in the Elvis Andrus trade last February, doubled home Corey Seager, who had been hit by a pitch.

Garcia smacked Blackburn’s next offering over the left-field fence for his 17th homer and a 3-0 lead.

It was 4-0 before the Rangers busted the game wide-open in a six-run fifth. Seager ignited the uprising with his 23rd homer of the year leading off, after which Kole Calhoun added a two-run single, Ezequiel Duran and Josh Smith contributed RBI singles, and Marcus Semien hit a sacrifice fly to extend the advantage to 10-0.

Coming off a three-up, three-down inning at the All-Star Game, Blackburn was pulled one out into the fifth, charged with 10 runs on 10 hits. He walked two and struck out five.

Perez (8-2), who also threw a shutout inning in the American League’s win Tuesday, took a shutout into the fifth before giving up a run on an infield out by Nick Allen.

He went on to complete seven innings, limiting the A’s to one run and four hits. He walked three and struck out six in winning his eighth straight decision while running his streak of consecutive starts without a loss to 17.

Oakland made the final score respectable by scoring six times in the last two innings. A four-run eighth featured a two-run double by Chad Pinder and a two-run homer, his third of the year, by Stephen Piscotty, before Sean Murphy (11th), Pinder (eighth) and Tony Kemp (third) launched consecutive solo shots in a three-run ninth.

Kole Calhoun added two hits and two RBIs, and Seager scored twice for Texas, which had totaled just five runs on 14 hits in the first two games of the series, both losses.

Pinder, Piscotty and Murphy had two hits each, while Pinder and Murphy scored twice apiece for the A’s, who were seeking their first four-game winning streak of the season.