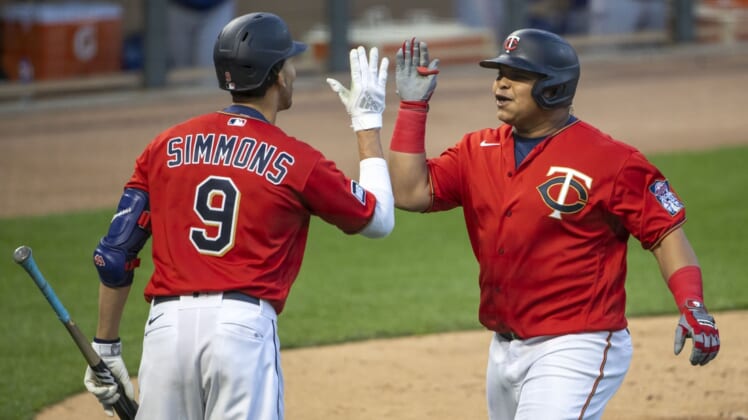 Adolis Garcia hit a two-run homer and Charlie Culberson added an RBI double to highlight a three-run 10th inning as the Texas Rangers rallied for a 6-3 victory over the Minnesota Twins on Tuesday night in Minneapolis.

Willie Calhoun also homered for the Rangers who scored two runs off Twins closer Taylor Rogers in the ninth to overcome a 3-1 deficit and send the game into extra innings. Garcia finished 3-for-5 with three RBIs.

Joely Rodriguez (1-1) pitched a hitless ninth to garner the win while Ian Kennedy picked up his eighth save with a scoreless 10th.

Byron Buxton and Willians Astudillo each homered for Minnesota which fell to 0-6 in extra-inning games this season. Brandon Waddell (0-1), who began the 10th in relief for the Twins, suffered the loss, allowing three runs, two earned, on three hits in 2/3 of an inning.

Texas took a 1-0 lead in the first inning as Twins starter J.A. Happ struggled with his control, hitting leadoff batter Isiah Kiner-Falefa who then advanced to second on a one-out walk to Nate Lowe. Garcia then drove in Kiner-Falefa with a line single to right but Happ then got out of the jam by getting Joey Gallo to fly out to the wall in dead center and Calhoun to ground out.

The Twins took a 2-1 lead in the bottom of the first when Josh Donaldson walked and scored on Buxton’s homer to the back of the bullpen in left-center, a 433-foot line drive that was the first home run allowed this season by Texas starter Kyle Gibson.

Astudillo made it 3-1 in the fifth when he lined his third home run of the season into the bleachers in left.

Calhoun led off the ninth with his third home run of the season, a 417-foot drive to right-center off Rogers. Culberson then reached first safely when Donaldson mishandled his soft grounder for an error and went to second on a single to left by pinch-hitter Andy Ibanez. After Jose Trevino sacrificed the runners to second and third, Culberson scored on a popup to shallow left by Kiner-Falefa to tie it, 3-3.

With Nick Solak starting the 10th as the runner at second, Garcia gave Texas a 5-3 lead one out later when he lined his seventh home run of the season to left off Waddell. Gallo followed with a double and later scored on Culberson’s double down the left-field line to finish the scoring.