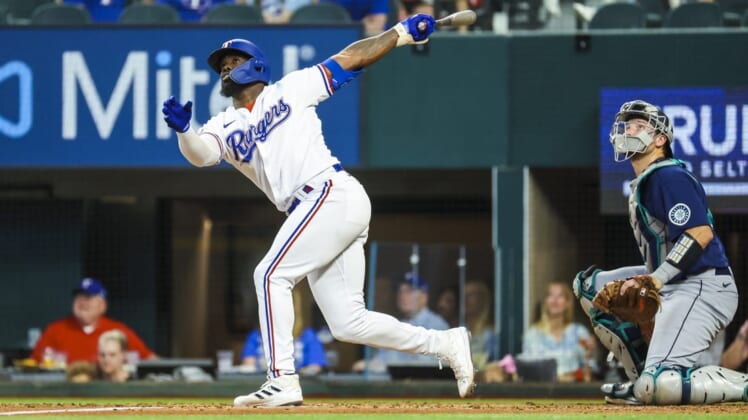 Joe Barlow, who blew the save on Friday, rebounded to lock down the ninth inning, and the Rangers snapped their three-game slide. Barlow has now saved 10 of 11 chances.

The Rangers snapped their three-game slide after their bullpen combined for four shutout innings.

The home run was Garcia’s ninth of the season, and third in his last seven games.The teams have split the first two games of the series.

The Mariners threatened in the eighth inning off John King. Singles by Julio Rodriguez and Eugenio Suarez put runners on the corners. But Adam Frazier was retired by King on a force out to short.

Otto (4-2) had to battle. He gave up two runs on two hits, with four strikeouts. But he walked five and hit a batter. With his pitch count at 95, he was replaced in the sixth.

Otherwise, Gonzales was solid. He gave up five hits, walked one and struck out five. It was his third start of at least seven innings.

The second time through the order is when the left-hander ran into trouble.

Neither team had a hit until Marcus Semien singled to open the fourth inning for Texas. After reaching second on Corey Seager’s ground out, Semien stole third base. Mitch Garver walked, putting runners on the corners for Garcia.

Garcia launched a three-run homer to left, turning on a Gonzales changeup.

For the Rangers, Otto held the Mariners without a hit until Cal Raleigh’s one-out single in the fifth inning. Winker followed with a two-run homer to right-center, making it a one-run game.

For Texas, the game marked the major league debut of infielder prospect Ezequiel Duran, who was called up from Double-A Frisco. Duran started at third base, and was hitless in three at-bats.