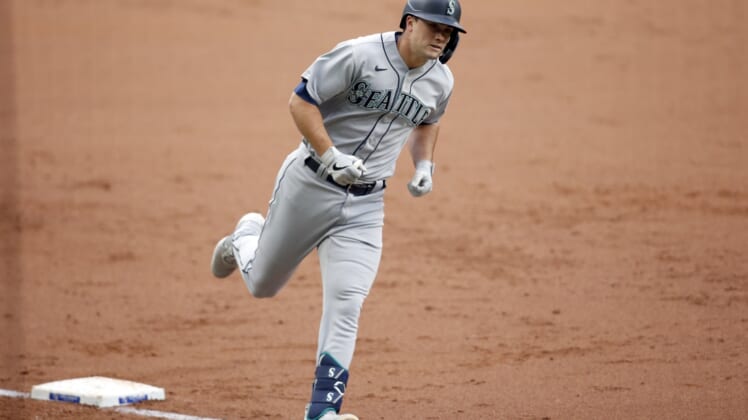 Joey Gallo homered twice and Adolis Garcia added a solo shot and made the defensive play of the game as the Texas Rangers held on to defeat the Seattle Mariners 9-8 Saturday night in Arlington, Texas.

Trailing 9-7 in the ninth with runners at first and third and two outs, Seattle’s J.P. Crawford blooped a single into shallow left field to score one run. The ball deflected off left fielder Willie Calhoun but Garcia, playing center, was able to recover the ball and throw home to nab Kyle Lewis at the plate for the game’s final out.

Left-hander John King (4-1) got the victory and right-hander Ian Kennedy escaped the ninth-inning jam for his 10th save of the season.

The Rangers erased an early four-run deficit and the game went back and forth in the latter innings.

Texas scored three times in the eighth to take the lead for good.

Garcia tied the score at 7-7 by leading off the inning with a solo shot to straightaway center field off Mariners left-hander Anthony Misiewicz (2-2).

Khris Davis, making his Rangers debut after being activated from the injured list (left quad strain) earlier in the day, followed with a pinch-hit single to left and advanced to second on a wild pitch. Following an intentional walk to Charlie Culberson one out later, Jonah Heim hit a run-scoring double into the right field corner, putting runners at second and third.

The Rangers scored their final run when Calhoun hit a ball straight to shortstop Crawford with the infield drawn in. Crawford threw home but catcher Luis Torrens apparently forgot there wasn’t a runner at first base, stepping on the plate instead of tagging the sliding Culberson.

The Mariners built a 5-1 lead through 3 1/2 innings, scoring twice in each of the first two frames against Rangers right-hander Kohei Arihara, who lasted just 3 2/3 innings.

Seattle used seven pitchers in a bullpen game with left-handers Marco Gonzales and Nick Margevicius on the 10-day injured list.