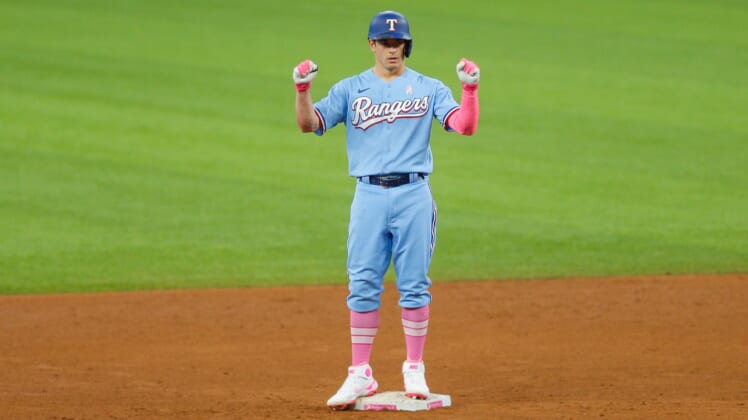 Adolis Garcia homered and drove in five runs as the Texas Rangers defeated the Seattle Mariners 10-2 on Sunday afternoon in Arlington, Texas, to take two of three games in the series.

Charlie Culberson also homered for the Rangers, sparking a six-run fifth inning in which Garcia hit a three-run shot.

Mariners left-hander Justus Sheffield (2-3) allowed just one unearned run through the first four innings but struggled mightily in the fifth.

Trailing 2-1, Culberson homered deep to left-center field on the first pitch in the bottom of the inning. Jose Trevino then reached on a fielding error by Mariners shortstop J.P. Crawford, Isiah Kiner-Falefa lined a single to right and Nick Solak followed with a two-run double to left to break the tie. Nate Lowe grounded a single to left before Garcia hit a 1-2 pitch over the fence in left-center to make it 7-2 lead. It was Garcia’s ninth homer of the season.

The Rangers added two runs in the sixth, the last on a run-scoring single by Garcia, and another in the eighth.

The Rangers opened the scoring with an unearned run in the third. With one out, Kiner-Falefa reached on a fielding error by Mariners third baseman Kyle Seager and second baseman Dylan Moore then booted a grounder by Solak, putting runners at first and second. After Lowe was caught looking at a called third strike, Garcia lined a run-scoring single to left field.

The Mariners took a 2-1 lead with two runs in the fifth. Evan White led off with a walk and advanced to second on a one-out single to left by Crawford. Mitch Haniger then grounded a run-scoring single into right field, sending Crawford to third. Seager drove in the go-ahead run with an infield single to short.