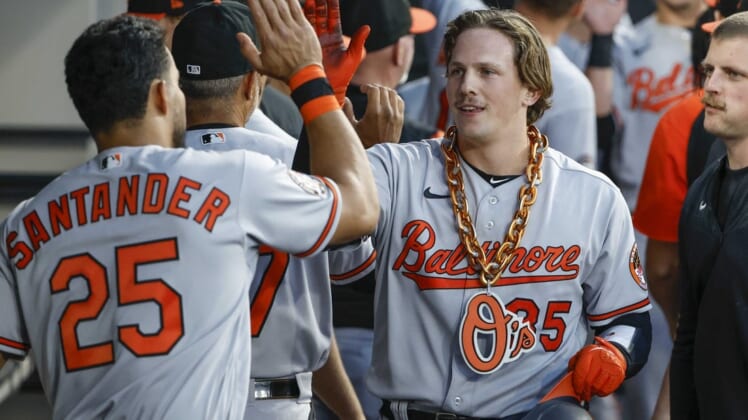 Rookie Adley Rutschman recorded a career-high three RBIs and Dean Kremer tossed 5 2/3 strong innings to lift the visiting Baltimore Orioles to a 4-0 victory over the Chicago White Sox on Thursday.

Rutschman belted a two-run homer in the fourth inning and added an RBI double in the sixth. Cedric Mullins chipped in an RBI single in the ninth to cap the scoring.

Ryan Mountcastle ripped a pair of doubles among his three hits to propel the Orioles to their fifth win in their last seven games.

Seby Zavala had a pair of doubles and Jose Abreu also had two hits for the White Sox, who have lost two straight after winning six of their previous eight games.

Injury-riddled Chicago was dealt another blow as Josh Harrison sustained a right triceps contusion after he was hit by a pitch from Kremer (2-1) to begin the fifth inning. X-rays were negative.

Kremer allowed seven hits and struck out four before leaving after 93 pitches.

Two relievers bridged the gap to Jorge Lopez, who struck out the only two batters he faced in the ninth inning to notch his 12th save of the season.

Baltimore opened the scoring in the fourth inning. Mountcastle ripped a one-out double before Rutschman launched a 2-2 cutter from Johnny Cueto (1-4) over the wall in right field. The homer was Rutschman’s second of the season.

Chicago attempted to respond in its half of the fourth; however, right fielder Austin Hays threw a one-hop strike to Rutschman to get Gavin Sheets at the plate for the third out.

The Orioles increased their lead to 3-0 in the sixth inning. Hays belted a ground-rule double and advanced to third on Mountcastle’s single to left-center field before trotting home on Rutschman’s double down the right-field line.

Prior to the game, Chicago placed shortstop Danny Mendick and right fielder Adam Engel on the 10-day injured list. Mendick sustained a torn ACL in his right knee Wednesday in a 9-5 loss to the Toronto Blue Jays; Engel is dealing with a strained right hamstring.