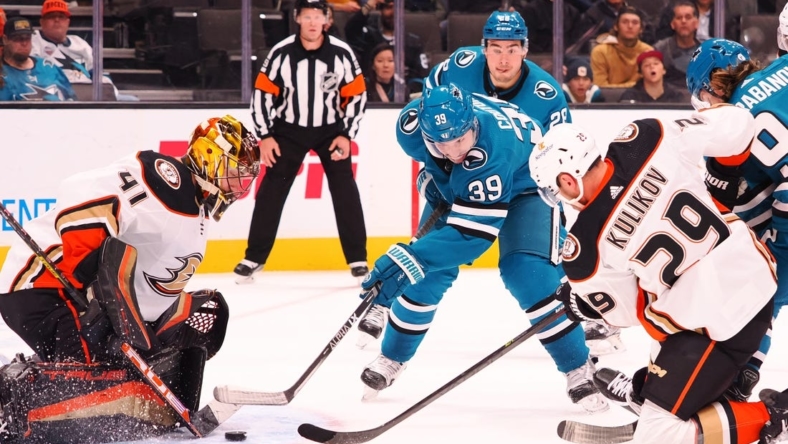 Adam Henrique scored two goals for the visiting Anaheim Ducks in a 6-5 shootout win against the San Jose Sharks on Tuesday night.

Frank Vatrano, Ryan Strome and Max Comtois also scored, and Anthony Stolarz made 39 saves for the Ducks, who have won two in a row for the first time this season, but remain the only NHL team without a win in regulation.

Trevor Zegras and Troy Terry scored in the shootout for Anaheim, while Logan Couture scored the Sharks’ only shootout goal.

The Sharks pulled Kahkonen for the extra attacker and Karlsson scored his third goal with 2:12 left in the third period to tie the score for a fifth time 5-5.

It was the first NHL hat trick for Karlsson.

Henrique scored his first goal of the season off a centering pass from Kevin Shattenkirk to give Anaheim a 1-0 lead at 5:16 of the first period.

Karlsson scored two goals 23 seconds apart in the first period to give the Sharks their only lead at 2-1.

He tied it with a long wrist shot through traffic at 6:18, and then scored from nearly the same spot with another wrister, giving him three consecutive multipoint games (six goals, three assists).

Vatrano scored off a feed from Isac Lundestrom to tie it 2-2 at 10:52 of the first. Henrique put the Ducks back ahead 3-2 when he scored up high on a backhand with 15 seconds left in the opening period.

San Jose was on its second power play when Meier scored short side from the left circle off the rush to tie the score 3-3 at 3:28 of the second period.

Strome put the Ducks back ahead for a third time 4-3 when a shot from John Klingberg deflected off his midsection and into the net at 15:10.

Meier was credited with his second goal because he was the nearest San Jose player when Ducks right wing Jakob Silfverberg shot the puck into his own net to tie the score 4-4 at 15:31 of the second.

Comtois scored off a feed from Terry to give the Ducks a 5-4 lead at 11:31 of the third period.