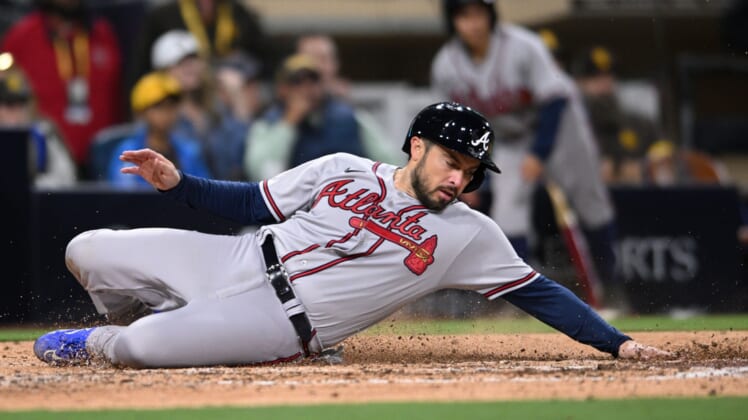 Adam Duvall lined broke a tie by lining a two-run double off San Diego Padres reliever Pierce Johnson with two outs in the eighth inning Friday night to lead the visiting Atlanta Braves to a 5-2 victory.

Austin Riley started the rally with his second hit of the game, a one-out single off Johnson. With two out, Riley broke for second and Travis d’Arnaud lined a single to right center through the hole vacated by Padres’ second baseman Jake Cronenworth.

Duvall then lined his double into the left field corner. He later scored the third run in the inning on a wild pitch by Dinelson Lamet.

Veteran reliever Darren O’Day (1-0) earned the win with a perfect seventh inning, which included two strikeouts. Kenley Jansen recorded his first save as a member of the Braves and the 351st of his career. Four Atlanta relievers retired 12 of the 13 hitters they faced. Johnson (0-1) took the loss.

Padres left-hander MacKenzie Gore and Braves right-hander Kyle Wright — two of the top five picks from the 2017 draft — battled to a 2-2 draw after five innings.

In his major league debut, Gore allowed two runs on three hits and two walks with three strikeouts in 5 1/3 innings. He was the third overall pick in the 2017 draft.

Wright, taken fifth overall, gave up two runs on five hits with nine strikeouts and no walks in five innings.

Atlanta built a 2-0 lead on Ozzie Albies’ solo homer in the third, and Marcell Ozuna’s RBI single in the fourth. He scored Austin Riley, who opened the inning with a double into the left field corner.
The Padres drew even with two runs in the bottom of the fifth.

Wright hit rookie C.J. Abrams with a pitch with one out. Abrams stole second and scored on a single by Ha-Seong Kim, who then scored from first on Manny Machado’s bloop double to left with two outs in the inning.

Machado had three hits Friday, giving him eight in 10 at-bats in the first two games of the series.