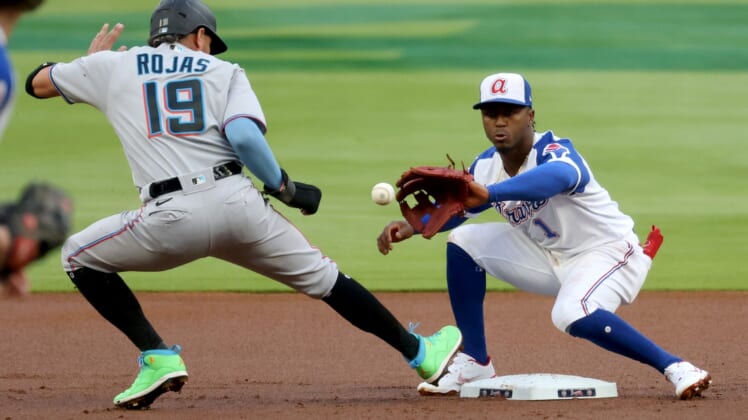 Miami left fielder Adam Duvall had two home runs and matched a club record with seven RBIs to help lead the visiting Miami Marlins to a 14-8 win over the Atlanta Braves on Tuesday.

Miami came up with season highs with 14 runs and hits (17) and seven of its starting position players got at least one hit. Third baseman Brian Anderson was 3-for-5, including his first homer and three RBIs, and Miguel Rojas was 3-for-6 with an RBI and two runs scored.

The winning pitcher was John Curtiss (1-0), who pitched 1 2/3 scoreless innings in relief of Pablo Lopez. Curtiss allowed one hit and struck out two. Lopez pitched four innings and gave up six runs on nine hits and one walk. He struck out six.

Atlanta grabbed a 3-0 lead in the first inning on a home run by Ozzie Albies and a two-run shot from Marcell Ozuna, his first. But Miami answered with three in the second on a solo homer by Anderson, an RBI double from Rojas and a single from Starling Marte.

Miami took a 4-3 led on Duvall’s home run in the third, but Atlanta matched it in the bottom half on Travis d’Arnaud’s RBI single.

The Marlins broke the game open in the fourth with a two-out rally. Duvall drove home two runs with a double in the left-field corner and Anderson knocked in two more with a single.

Freddie Freeman and Ozuna drove in runs in the bottom of the fourth, but Miami broke the game open with three runs in the sixth. Duvall drove in the first run with a single and Jon Berti got two more home on a double. Duvall hit a three-run homer in the seventh.