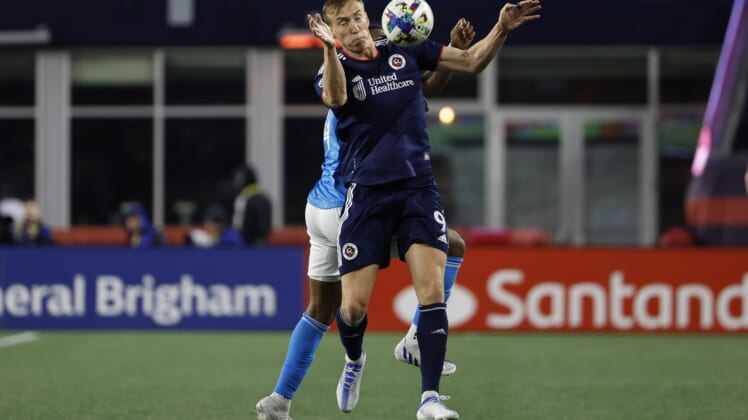 Adam Buksa returned from a suspension and made an early impact with a goal in the opening minutes and the New England Revolution stopped a skid by beating visiting Charlotte FC 2-1 on Saturday night at Foxborough, Mass.

Matt Polster also scored for the Revolution, which avenged a road loss from earlier in the season.

Buksa was in the lineup coming off a suspension from a red card earlier this month, and it was his first start since March 16.

The outcome allowed the Revolution (2-4-1, 7 points) to avoid what would have been the franchise’s first five-game losing streak.

Goalkeeper Brad Knighton made five saves, with a couple of dandy stops coming while preserving a 1-0 lead. Then up 2-0, he gave up Christian Ortiz’s goal in the 85th minute.

Buksa, who specializes in his aerial work in front of the net, scored in the eighth minute on a header from in the box, with the ball going to the top right side of the net. Brandon Bye picked up the assist after delivering the cross.

Polster scored in the 72nd minute off a set piece from close range. It came after Kahlina made an initial save on Sebastian Lletget’s shot, but Polster was there to clean up the rebound.

For the most part, Charlotte FC failed to take full advantage of possession time.

In the final minute of the first half, Charlotte FC’s Daniel Rios sent a shot off the right post.

Conujo had a chance on a header in the 53rd minute, but Knighton barely knocked the ball away.

The Revolution was without center back Henry Kessler in the lineup despite his expected return from a hamstring injury.