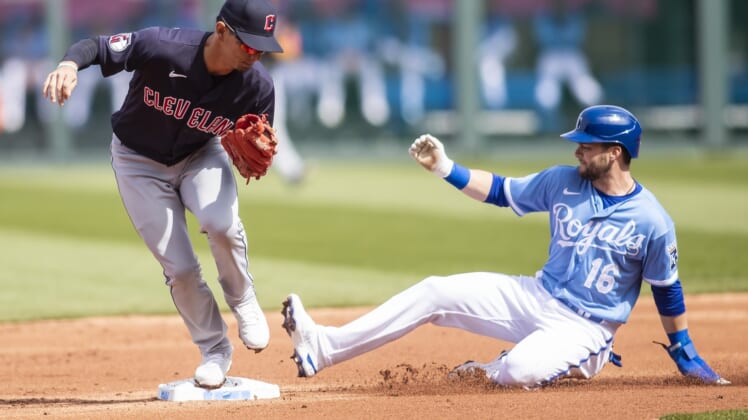 Adalberto Mondesi lined a single into center field to score Kyle Isbel with the winning run with none out in the 10th inning as the Kansas City Royals defeated the Cleveland Guardians 1-0 on Saturday afternoon.

It was Mondesi’s first career walkoff hit as the Royals beat Cleveland for the second straight time.

Collin Snider (1-0), making his major league debut, was the winning pitcher. Emmanuel Clase (0-1) took to the loss without recording an out.

The Guardians threatened in the top of the 10th. Owen Miller began the frame as the runner on second. He went to third on a one-out infield single by Ernie Clement. Bobby Witt Jr. then threw out Miller at home after a diving stop at third and Snider struck out Yu Chang.

Kyle Isbel started as the runner on second in the bottom of the 10th. Hunter Dozier hit a line drive to right, too hard to score Isbel. But Mondesi delivered with his first hit of the season on the next pitch.

Neither of Saturday’s starting pitchers, Zach Plesac and Brad Keller, allowed a run, but neither was involved in the decision. Keller gave up two hits in six innings and Plesac allowed three in 5 2/3 innings.

Plesac took a line drive off the right side of his back, which resulted in the first out of the sixth inning. Nicky Lopez led off the inning with a single up the middle, and Whit Merrifield lined a 2-2 pitch back up the middle. Had it gone through, the Royals would have had first and third with no outs. But Amed Rosario caught the carom.

Plesac retired Witt before being relieved by Bryan Shaw, who retired Andrew Benintendi to end the inning.

Keller gave up five earned runs in the first inning of his Opening Day start in 2021, which was the start of a long, difficult season. His ERA never got below 5.39 all season, and he was shut down in late August. But on Saturday, he was sharp all day. He struck out five and walked just one. He threw 46 strikes in his 69 pitches.