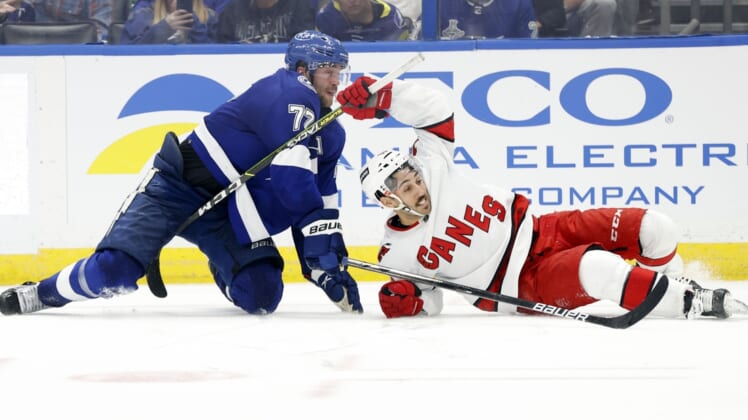 These aren’t necessarily the worst of times this season for the Carolina Hurricanes. Just not the most ideal of times.

So they’ll try to change that trajectory when the Tampa Bay Lightning visit for Tuesday night’s game in Raleigh, N.C.

“These are tough losses, but we have a good group in there that I just love the way they play,” Hurricanes coach Rod Brind’Amour said.

The Hurricanes failed to score Sunday night despite taking 44 shots on goal against the New York Rangers in a 2-0 defeat.

“The way we played (Sunday) is the way we want to play,” center Sebastian Aho said. “So we don’t want to start doing other crazy stuff and try to go off the rails.”

That tends to be the tone. It largely has been a season filled with successes for the Metropolitan Division-leading Hurricanes, who have gone two or more consecutive games without a point just twice all season.

Carolina was busy on trade-deadline day Monday, acquiring forward Max Domi from the Columbus Blue Jackets as part of a three-team deal with the Florida Panthers. The Hurricanes received Domi and Panthers defense prospect Tyler Inamoto while the Blue Jackets picked up defense prospect Aidan Hreschuk from Carolina, and the Panthers received the rights to forward Egor Korshkov from Carolina and a sixth-round draft pick in 2022 from Columbus.

The Hurricanes also signed forward Jesperi Kotkaniemi to an eight-year contract extension on Monday. The Hurricanes said the deal will pay Kotkaniemi an average annual salary of $4.82 million through the 2029-30 campaign.

The Lightning have won two of their last three games, but like the Hurricanes they are coming off a home loss to the Rangers. That came with Saturday night’s 2-1 setback when Tampa Bay allowed a final-minute power-play tally.

“We played well enough to win that game,” Lightning coach Jon Cooper said. “We had look after look and they didn’t go (in).”

Tampa Bay has scored just one goal in three of its past five games. With penalties piling up too often for Cooper’s liking, he said the Lightning land in too many penalty-killing situations.

The Lightning added forward Nick Paul on Sunday in a trade with the Ottawa Senators, sending forward Mathieu Joseph and a fourth-round draft pick in 2024 to the Senators. Paul had a career-high 11 goals along with seven assists this season with Ottawa.

In the past six games, the Hurricanes have reached the three-goal mark only twice. Of their 12 goals in that span, two came courtesy of late-game empty nets.

“The goals will come,” Staal said. “It’s going to come and it will be at the right time. … If we continue to play the way we do, we’re going to be on the better side on most of them.”

Brind’Amour said there have been strong starts for the Hurricanes in many recent games even though those have been accompanied with scoring in the first periods. If they keep putting enough shots on net, the results could be in the works.

“We know and we believe that it’s going to turn our way and we’re going to get bounces,” Aho said. “We have to be better on those chances. We believe in each other. It’s a long season. These situations teach you the most. You’ve got to learn from these.”

This marks the Lightning’s only visit of the regular season to Raleigh. Last spring, Tampa Bay ended the Hurricanes’ season in the second round of the playoffs, winning three of those postseason games at PNC Arena, where Game 5 marked the last outing for Carolina.

The Hurricanes won 2-1 on Nov. 9 at Tampa Bay. They’ll return there next Tuesday for the last matchup on the slate.