Aces turn up the offense to rout Mercury 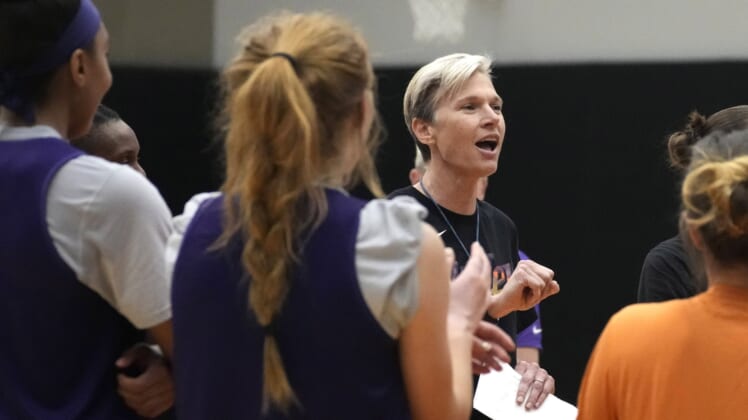 A’ja Wilson had a double-double and all five Las Vegas starters scored in double figures as the visiting Aces routed the Phoenix Mercury 106-88 in the season opener for both teams Friday night.

Dearica Hamby scored 24 points, Jackie Young and Kelsey Plum had 20 each, Wilson finished with 15 points and 11 rebounds and Chelsea Gray scored 11 as the Aces won their first game under head coach Becky Hammon and spoiled the debut of Mercury head coach Vanessa Nygaard, who was a Las Vegas assistant last season.

The Aces, who led by as many as 28 points, shot 58 percent from the floor and made 52 percent of their 3-pointers.

Skylar Diggins-Smith scored 25 points, Shey Peddy scored 16, Tina Charles had 15 and Sophie Cunningham 12 to lead Phoenix, which was the WNBA runner-up last season but is playing indefinitely without star center Britney Griner, who is being detained in a Russian prison after being arrested at a Moscow airport.

The Aces scored the first four points of the third quarter to take a 26-point lead before the Mercury found some offense.

Diana Taurasi made two free throws for her first points, then made her first field goal before Cunningham added five straight points to trim the lead to 63-47.

Gray scored the next four and Plum added eight as Las Vegas took an 86-63 lead at the end of the third quarter.

Wilson, Theresa Plaisance and Plum had three points each during a 9-0 run that helped Las Vegas take a 31-17 lead at the end of the first quarter.

The Aces scored the first eight points of the second quarter to take a 22-point lead as Phoenix went scoreless for nearly the first three minutes.

Peddy’s three-point play ended the drought and the Mercury pulled within 41-25 on Diggins-Smith’s 3-pointer.

Hamby and Young scored four points each as the Aces rebuilt the lead to 54-32 at halftime.