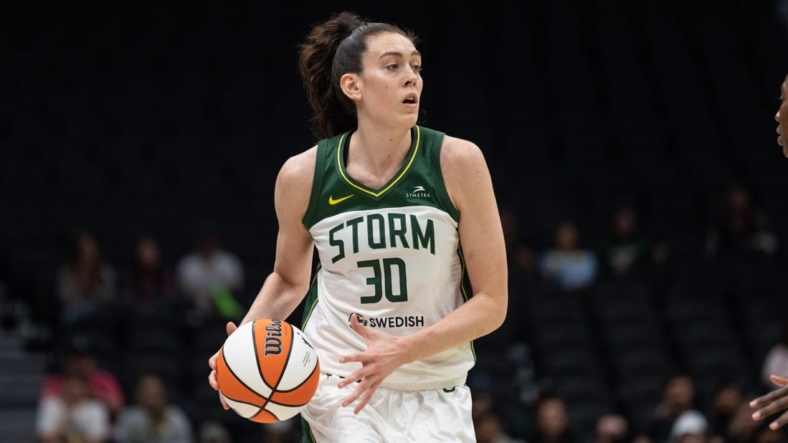 The Las Vegas Aces evened their WNBA semifinals series by defeating the Seattle Storm in Game 2.

Now the Aces will try to regain home-court advantage in the best-of-five series when they visit Seattle for Game 3 on Sunday.

“We dug in and did what we had to do,” Aces coach Becky Hammon said of the 78-73 victory on Wednesday. “This was pretty much a must-win for us.”

The biggest difference for No. 1-seeded Las Vegas from Game 1 to Game 2 was the performance of A’ja Wilson, who had eight points in Game 1 and a playoff career-high 33 points, 13 rebounds and three blocks in Game 2.

“We think we have the MVP, and she played that way,” Hammon said of Wilson. “We came in wanting to get her more shots, more looks, more involved.”

The Aces are looking for a better start in Game 3 than they have had in the first two games. They fell behind 26-15 after the first period of the 76-73 loss in Game 1. No. 4-seeded Seattle scored the final 10 points to take a 23-16 lead after the first quarter of Game 2.

“I thought we still came out a little tight,” Hammon said.

“It’s competitive,” Stewart said. “That’s what you want. You want these games to be competitive. You want people to go at you, so you can go at them.”

Seattle coach Noelle Quinn said she was “super proud” of her team’s effort, but she cited a 23-11 disparity in free-throw attempts as problematic. The Storm made all 11 and the Aces made 18.

“It’s tough to win a game only shooting 11 free throws, but holding Vegas under 80, that’s a feat,” Quinn said. “We just got to clean up some things offensively.”