Aces hold off Sun to take Game 1 of WNBA Finals 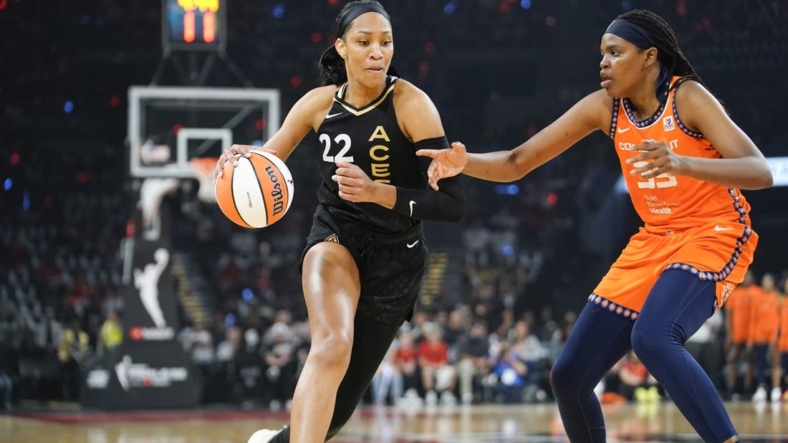 A’ja Wilson racked up 24 points and 11 rebounds and Chelsea Gray added 21 points as the host Las Vegas Aces held off the Connecticut Sun 67-64 on Sunday in Game 1 of the WNBA Finals.

Game 2 in the best-of-five series is Tuesday in Las Vegas. Games 3 and 4, the latter if necessary, will be Thursday and Sunday in Uncasville, Conn.

The Aces took charge during the third quarter, eventually turning an eight-point deficit into an eight-point lead after a pullup jumper by Jackie Young with 2:40 to play. Wilson dominated on both ends of the floor in that pivotal stretch, on one occasion blocking a shot, grabbing the rebound and running the floor to convert a layup.

The Sun clawed back to within three points on a steal and layup by Alyssa Thomas with 34.2 seconds to play, but they would get no closer.

Young added 11 points for the Aces, who won despite getting just six points from guard Kelsey Plum on 1-of-9 shooting from the floor and only five points from its bench players.

Thomas led the Sun with 19 points and 11 rebounds while Jonquel Jones had 15 points, Brionna Jones tallied 12 and Natisha Hiedeman scored 10.

The Aces led by as many as a dozen points by midway through the first quarter. Wilson and Gray combined for 20 points in the period as Las Vegas forged a 25-17 lead after 10 minutes.

Things flipped in the second period as the Connecticut defense took charge, holding the Aces to just nine points while leapfrogging to a 38-34 lead at the break. Las Vegas missed four of its last five shots in the half and went more than four minutes without scoring.

Thomas and Brionna Jones had 10 points apiece to lead the Sun at the half, while Wilson had 12 and Gray scored 11 over the first two periods for Las Vegas. Connecticut earned a 23-16 edge on the glass in the half and had eight offensive rebounds to just two for the Aces.

Connecticut pushed its lead eight points in the first minute of the third quarter before the Aces, and namely Wilson and Gray, began chipping away at their deficit. Las Vegas went back in front on two Wilson free throws with 1:43 to play in the third and carried a 55-53 lead heading into the final period.