Aces have Storm, Sue Bird on the brink 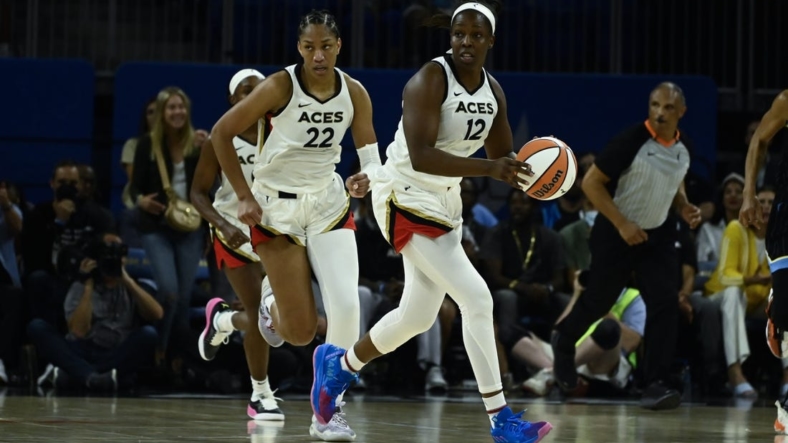 The Las Vegas Aces can advance to the WNBA Finals by beating the host Seattle Storm on Tuesday night.

But given how difficult it has been for the No. 1 seed to take a 2-1 lead on the No. 4 seed in the best-of-five series, the Aces understand the challenge they are facing in order to move on.

A Storm victory Tuesday would send the series back to Las Vegas for a deciding Game 5 on Thursday.

The Aces’ 110-98 overtime victory Sunday in Game 3 featured a series of twists and turns in the final two minutes of regulation.

Seattle led by one point but missed an opportunity to extend the lead when Tina Charles missed two free throws with 7.2 seconds remaining. Wilson’s layup put the Aces on top 90-89 before Sue Bird’s 3-pointer put the Storm back on top with 1.0 remaining on the clock.

Jackie Young’s layup beat the buzzer for the Aces to force overtime, 92-92. It remained a one-possession game until Chelsea Gray hit a 3-pointer for a 102-96 Las Vegas lead with two minutes remaining, and Wilson came up with a steal to lead another Gray basket and an eight-point Aces advantage.

“That was a helluva game,” Las Vegas coach Becky Hammon said. “I don’t know if I’ve ever been a part of something like that, the back-and-forth and the battle.”

Bird, whose Hall of Fame career could end as soon as Tuesday night after already announcing her retirement, bemoaned the final seconds of regulation.

“They scored (four points) in three seconds,” Bird said. “That, for me, is where we really let this one go.”

Seattle briefly held a two-point lead in overtime before being outscored 18-6 in the extra period.

“All of what happened (at the) end of the game, all of the execution things, that falls on me,” Storm coach Noelle Quinn said.