Aces come within one victory of title after cruising past Sun 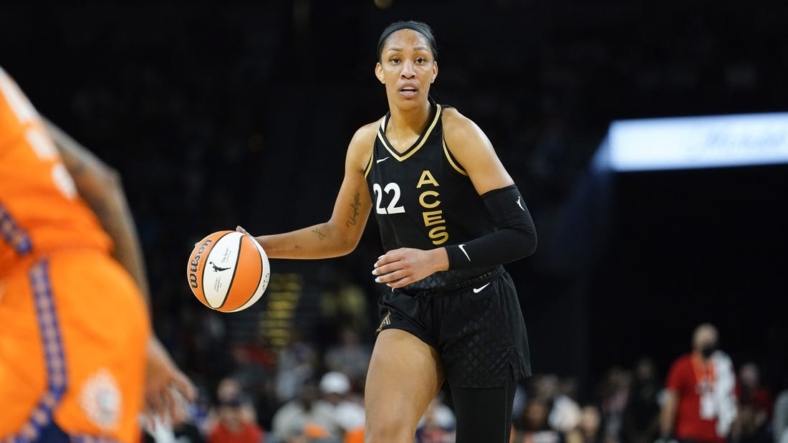 A’ja Wilson had 26 points and 10 rebounds as the host Las Vegas Aces took a 2-0 lead in the WNBA Finals by defeating the Connecticut Sun 85-71 on Tuesday night.

Chelsea Gray added 21 points and eight assists and Kelsey Plum bounced back from a six-point performance in Game 1 to have 20 points and seven assists for the No. 1 seed Aces, who can claim their first championship by winning Game 3 on the road Thursday night.

Connecticut began the third quarter with a 9-4 run that pulled it within 49-46.

Plum scored five points as the Aces rebuilt the lead to 10 points through the quarter.

Courtney Williams answered with a basket, but Riquina Williams’ 3-pointer and Wilson’s two free throws gave Las Vegas a 68-54 lead at the end of the period.

The Aces took control by scoring the first four points of the fourth quarter.

The score was tied six times in the first 6 1/2 minutes of the game before Connecticut went cold.

Gray sandwiched two baskets around a 3-pointer by Jackie Young in a 7-0 run that gave Las Vegas a 21-14 lead.

Brionna Jones made one of two free throws, but a Suns field-goal drought covered the final 3:45 of the first quarter. Riquina Williams’ basket gave the Aces a 23-15 lead at the end of the period.

Las Vegas increased the lead to 12 points before Thomas made Connecticut’s first field goal in nearly six minutes. Courtney Williams and Brionna Jones quickly followed with two more baskets to get the Sun within 29-23.

Plum scored nine of the Aces’ next 10 points as they increased the lead to 39-25.

Connecticut closed within six with 24.9 seconds left in the first half before Wilson’s layup gave Las Vegas a 45-37 halftime lead.