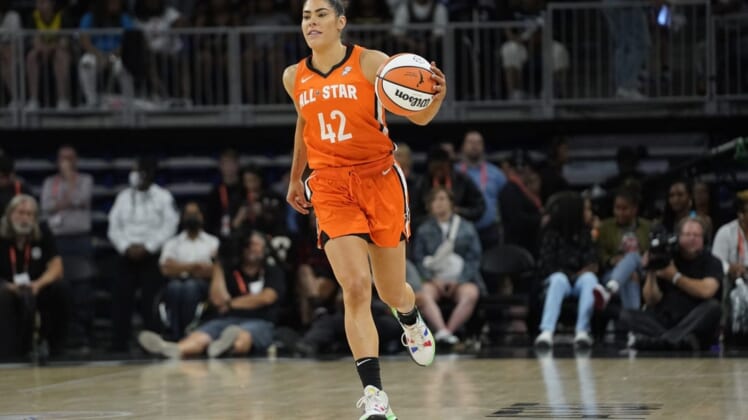 The Las Vegas Aces will look for a complete effort on Sunday afternoon when they conclude a two-game series against the struggling Indiana Fever in Indianapolis.

Sure, Las Vegas (21-8) rebounded from a sluggish performance at the onset of Friday’s clash with Indiana to record a convincing 93-72 victory. But there were a few anxious moments along the way.

The Fever (5-26) found themselves leading in the first quarter and trailing by just one early in the second before the Aces’ All-Stars upped the ante.

“I don’t know what was going through our mind,” Wilson said, per the Las Vegas Review-Journal. “It was a slow start, and we can’t have that against anyone.”

“We’ve got to be locked in from start to finish,” Plum added.

Plum averages 20.1 points per game, third best in the WNBA, while Wilson’s 19.5-point contribution is fifth in the league.

Wilson and Plum combined to make 18 of 26 shots from the floor — including 4 of 5 from 3-point range — before sitting out the entire fourth quarter on Friday.

Indiana native Jackie Young collected 15 points and seven rebounds for the Aces, who held a 41-28 advantage on the boards — including 15-9 at the offensive end.

Rookie center Queen Egbo scored all 13 of her points in the first half for the Fever.

“She settled a couple times when she should have just been as aggressive as she was in the first half,” interim coach Carlos Knox said, per the Indianapolis Star. “I know Queen, and I understand where she’s coming from as far as her desire to play, so it wasn’t anything different. It wasn’t anything that they done or that she done. It was just a matter of her recognizing situations and being able to capitalize.”

Kelsey Mitchell, who averages a team-best 18.4 points per game, joined rookie Destanni Henderson in finishing with 12 for Indiana on Friday.