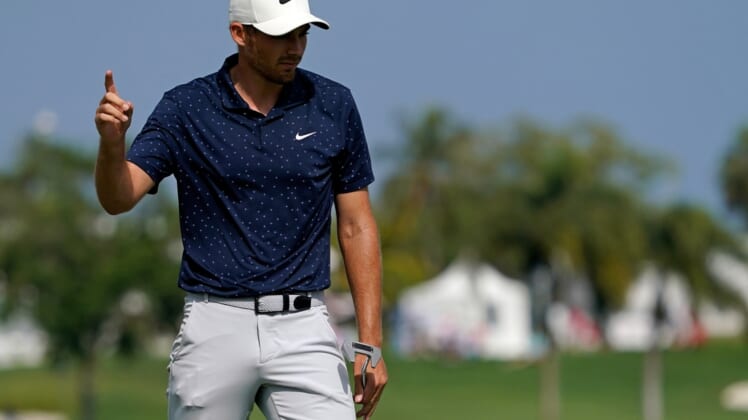 Wise was at 12-under for the tournament to lead both Brandon Hagy and Australia’s Matt Jones, who were at 9 under on the PGA National course. Hagy’s 8-under 62 was the best round of the day Friday, while Jones followed his 9-under 61 on Friday with an even-par 70 in the second round.

Sam Ryder was alone in fourth place at 8 under following a 63 on Friday, while Denny McCarthy (65), Scott Harrington (67), Russell Henley (69) and Ireland’s Shane Lowry (66) were tied for fifth place at 7 under.

Opening his second round on the back nine, Wise was just 1 under for the day before a birdie on his eighth hole of the day and an eagle 3 on the par-5 18th hole when he put his 174-yard approach shot to 3 feet and made the putt.

Wise had a second eagle 4 at the par-5 third hole thanks to a 46-foot putt and closed his round with a birdie at No. 9, dropping a 14-foot putt.

“I’ve been able to take advantage (of the 18th hole) over the last couple days,” Wise said. “I hit 7-iron into there today. When the wind switches (Saturday) it will be a 2-iron or 3-wood. So, I’m happy to get that one. And then made a bomb on 3. That’s a little bit of luck, so you take it and roll with it.”

Hagy’s 62 consisted of six birdies and an eagle at No. 18, which was his ninth hole of the day. The eagle came thanks to a 47-foot putt on what will be the finishing hole over the weekend. He was a late addition to the event, getting added to the field Wednesday.

“It’s been kind of a funny week,” Hagy said. “I was in Scottsdale (Ariz.) on Tuesday afternoon and got a flight at the last minute, fly out Tuesday, don’t play practice rounds, you know. Maybe I’m feeling like I’m playing on a little bit of house money a little bit, so I kept it pretty loose out there.”

One day after he tied the course record, Jones struggled to match his feat with four bogeys over his first seven holes. His even par came even though he also had an eagle 3 at the 18th hole.

“It’s always tough to follow up a really good round,” Jones said. “I hit it well, warmed up well, and my goal was just to give myself as many chances at birdie as I could. I had plenty. I had a few out there that I didn’t make, but I had a good day and I’m happy where I am.”

South Korea’s Sungjae Im, the defending champion, shot a second consecutive 2-under 68 and is in a tie for 16th at 4 under. After shooting a 2-under 68 on Friday, 50-year-old Phil Mickelson made the cut at 1 under for the tournament.