Aaron Rodgers on Richard Sherman: “Be Aware, not Scared” 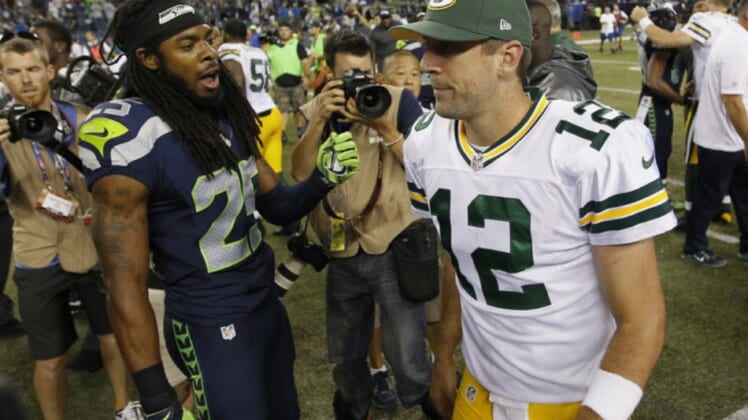 The last time Green Bay Packers’ quarterback Aaron Rodgers faced the Seattle Seahawks cornerback Richard Sherman was back in Week 1. And Rodgers never threw a ball Sherman’s way. During his radio show this week, Rodgers shared his philosophy on coming face to face with Sherman again, this time in the NFC Championship game (via ESPN.com).

You have to be aware of him. Not scared of him, but you have a ton of respect for him.

Look at the numbers, they don’t lie. Not a lot of guys catch passes on his side, and for the amount of times he’s targeted, his interception totals are very impressive. You just have to play your game, but if he’s locking his guy down, he’s probably not going to get a lot of passes thrown his way.

In the season opener in Seattle last fall, the Packers kept their No. 1 wideout Jordy Nelson on the opposite side from Sherman hoping that it would cause Sherman to switch sides of the field. As it ended up Sherman covered Jarrett Boykin, who didn’t see a ball come to him all night. That freed up Nelson to catch nine passes and Cobb six passes. Despite hitting up his top wide receivers for a total of 141 yards, the Packers lost to Seattle 36-16 and Rodgers had just one touchdown.

The biggest issue with that strategy is that is closed off one end of the field, which is not a recipe for success against a swarming Seahawks defense.

We will see what strategy Green Bay uses Sunday in the NFC Championship game, but it can’t be the same scheme we saw back in September.