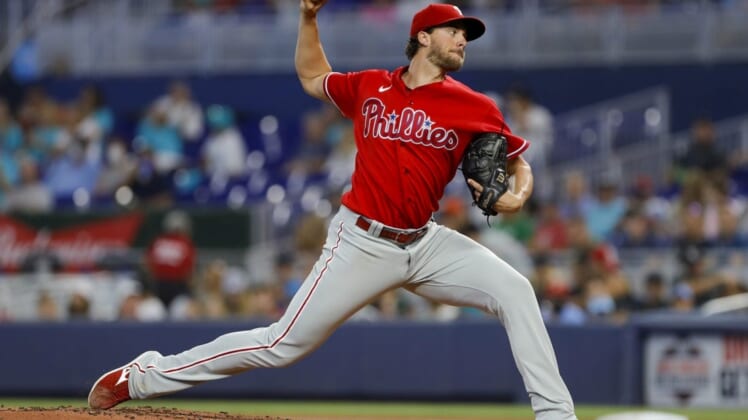 It was Philadelphia’s first sweep in South Florida since 2010 as the Phillies finishing their nine-game road trip at 5-4 entering the All-Star break.

Miami, which has gone eight straight games without hitting a homer, scored just one run in this series, including two consecutive shutouts.

It marked the sixth shutout in the past 13 games for Philadelphia, which continues to play without injured starters Bryce Harper and Jean Segura — both out with broken hands.

Yairo Munoz lofted a two-run homer to lead the offense for the Phillies, who head into the All-Star break on a roll. It was Munoz’s first homer since June 18.

Former Marlins catcher J.T. Realmuto went 1-for-3 with a run Sunday. He finished the series batting 6-for-11 with three doubles, one homer, three runs and three RBIs.

The Marlins didn’t get a runner to second base until Joey Wendle and Brian Anderson hit one-out singles in the ninth, forcing Nola out of the game.

Reliever Jose Alvarado picked up his first save of the season, striking out Garrett Cooper and getting Bryan De La Cruz on a grounder.

Added to Miami’s misery was the ejection of DH Jesus Aguilar, who was tossed in the second inning after he disputed a called third strike.

Philadelphia got all the scoring done in the fourth inning. Leadoff man Nick Castellanos started the rally by floating a soft single to center. Realmuto beat out a would-be, double-play grounder and scored from first on Alec Bohm’s double off the wall in right-center.

Matt Vierling followed by grounding an RBI double down the third-base line. Vierling fouled off four pitches before smacking a 1-2 changeup.

After Didi Gregorius hit a pop fly for the second out of the inning, Munoz swung at the next pitch, a 92-mph fastball, slugging his homer 386 feet to left.

The Marlins, who are now off until they play host to the Texas Rangers on Thursday, didn’t threaten until the ninth, when Cooper’s two-on shot down the left-field line was foul by just one foot. He struck out on the next pitch, and De La Cruz bounced out to end the game.

Philadelphia is off until Friday, when the Phillies will play host to the Chicago Cubs.