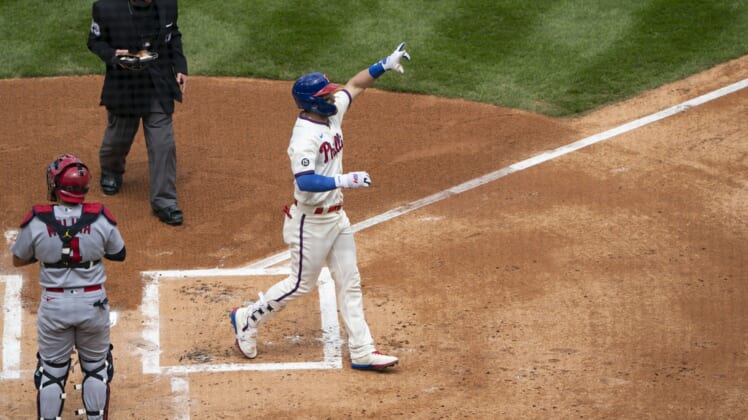 Harper reached base safely all four times and also doubled, singled and walked. Jean Segura added a pair of hits and extended his hitting streak to nine in a row.

Nola (1-1) allowed two hits, struck out 10 and walked none. It was Nola’s 17th career game with at least 10 strikeouts. Nola threw 109 pitches for his first career nine-inning complete game. His only other complete game came in a seven-inning game as part of a doubleheader.

The Phillies won the series by taking two of three.

The Phillies jumped out to a 1-0 lead in the first inning when Harper launched a 425-foot home run to the second deck in right field.

In the fifth, Rhys Hoskins walked with one out and Harper followed with a double down the left field line. J.T. Realmuto was then walked and Alec Bohm responded with a sacrifice fly to left for a 2-0 advantage.

St. Louis went down in order in both the sixth and seventh and had 13 hitters retired in a row by Nola.

Harper singled with two outs in the seventh and advanced to second on a wild pitch. Realmuto struck out swinging against Giovanny Gallegos to end the scoring threat.

The Cardinals’ Paul DeJong opened the eighth with a single to left. Dylan Carlson flied out, Justin Williams struck out looking and Austin Dean struck out swinging.