Aaron Lynch: 49ers have one of the best teams in the NFL 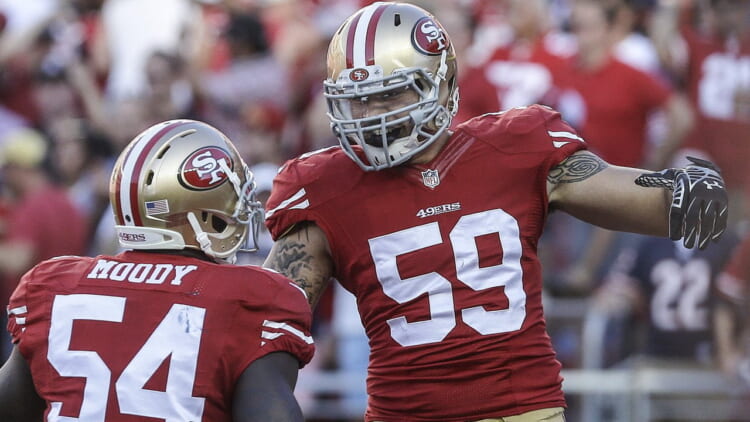 Fresh off yet another blowout loss, you’d think the San Francisco 49ers (1-6) would be a bit down in the dumps. Nothing could be further from the truth. Linebacker Aaron Lynch expressed unbelievable confidence in his team after the Niners’ 34-17 loss to the Tampa Bay Buccaneers Sunday at Levi’s Stadium.

“We have the team,” Lynch said, per Matt Maiocco of CSN Bay Area. “We possibly have one of the best teams in the NFL, easily. Hands down. We need to know how to keep finishing games and work together throughout the whole game. Once we get that down, nobody’s going to be able to mess with us.”

Lynch wasn’t alone in his optimism, either.

“I love this scheme,” safety Eric Reid said. “If everybody does their job, we shouldn’t get beat. But whenever there’s an explosive play, somebody is out of position. We just got to tighten up.”

These guys obviously believe the team’s abysmal record doesn’t represent the true quality of the 49ers in 2016.

But let’s be honest. Defensively, offensively, the 49ers are a dumpster fire.

Heading into Week 7, they ranked No. 28 in total offense, No. 19 in scoring offense, No. 27 in total defense and No. 31 in scoring defense. That was before Sunday’s dismal showing in front of the home crowd in Santa Clara.

The 49ers have lost six consecutive games now since opening the season with a shutout win over the Los Angeles Rams. In the last six games, they’ve lost by an average score of 37-19.

This is, in no way, shape or form, one of the “best teams in the NFL.”

Now, having confidence in yourself, your teammates and your system is an admirable trait. But so is taking an honest stock of what’s going on. That’s not something the 49ers are doing right now.