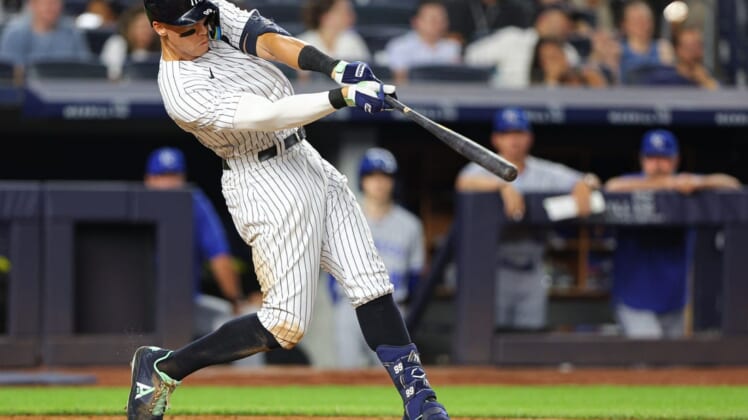 Aaron Judge hit a game-ending homer with one out in the ninth inning as the New York Yankees eked out a 1-0 victory over the visiting Kansas City Royals on Thursday night.

Judge won it when he lifted a first-pitch fastball from Scott Barlow (4-3) off an advertisement in the back of the visiting bullpen beyond left-center field. It was the third career game-ending homer for the slugger, who also walked off the Toronto Blue Jays and Houston Astros earlier this year.

Judge’s major-league-best 39th homer and sixth in seven games occurred after Yankees newcomer Andrew Benintendi capped an 0-for-4 debut by fouling out to left field.

Benintendi was acquired late Wednesday night from Kansas City for three minor league pitchers after flying to New York with the Royals. He struck out in his first at-bat, then grounded out in his next two plate appearances before the ninth.

The Yankees won for the sixth time in their past 16 games after getting swept in a two-game Subway Series by the host New York Mets.

Kansas City’s Brady Singer dominated the Yankees by throwing most sinkers and sliders in seven overpowering innings. He limited New York just to a Gleyber Torres single in the fourth inning while striking out 10 and walking one.

Singer fanned a career-high 12 against the Tampa Bay Rays in his previous outing.

New York’s Jameson Taillon frequently pitched with runners on, allowing four hits and two walks in six innings. He struck out eight, and the Royals were 0-for-12 with runners on against the right-hander.

Taillon worked around a fielding error by second baseman Torres in the first inning by striking out Hunter Dozier and retiring Ryan O’Hearn. He allowed a one-out triple to rookie Nick Pratto in the second but got Maikel Garcia to fly out and then struck out Kyle Isbel to end the inning.

In the third, Taillon allowed a leadoff double to MJ Melendez but got Dozier to ground out for the final out. Taillon got Dozier to bounce into a 4-6-3 double play after rookie Vinnie Pasquantino opened the sixth with a bunt single.