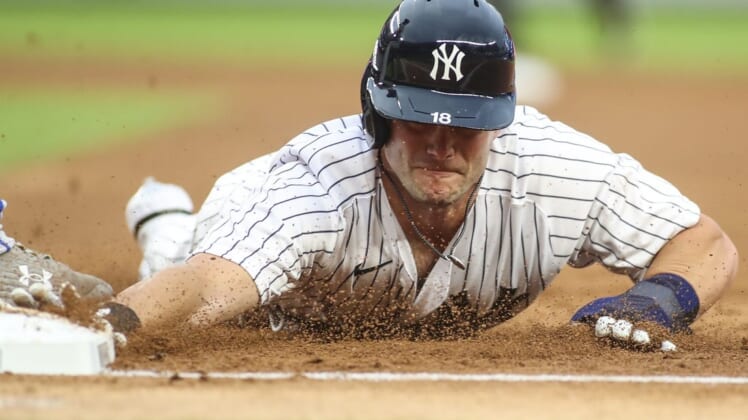 Aaron Judge became the first player this season to reach 40 homers and then capped an eight-run eighth inning with a grand slam as the New York Yankees rallied for an 11-5 victory over the visiting Kansas City Royals on Friday night.

Judge reached 40 homers by hitting a 449-foot two-run shot to left field in the third. The slugger then slammed his fourth career grand slam when he hit a first-pitch changeup to the short porch in right field.

Judge’s drive against Jackson Kowar gave the Yankees an 11-5 lead and marked his major league-leading ninth multi-homer game this season.

Before Judge’s second homer in the eighth inning, the Yankees tied the game on an infield single by newcomer Andrew Benintendi and a bases-loaded walk by Aaron Hicks off Scott Barlow (4-4). New York took a 6-5 lead when Isiah Kiner-Falefa extended his hitting streak to 15 games with a single to left and Jose Trevino made it 7-5 on an RBI groundout.

Before pulling off their latest comeback, the Yankees took a 3-0 lead on a solo homer by Anthony Rizzo in the first inning and a two-run drive in the third by Judge, whose game-ending homer off Barlow gave New York a 1-0 win Thursday.

The Royals rallied for five runs off Gerrit Cole in the fifth.

Whit Merrifield ended a Kansas City scoreless drought of 31 2/3 innings with a two-run single and Salvador Perez hit a three-run homer in his first game back from a thumb injury to give the Royals a 5-3 lead.