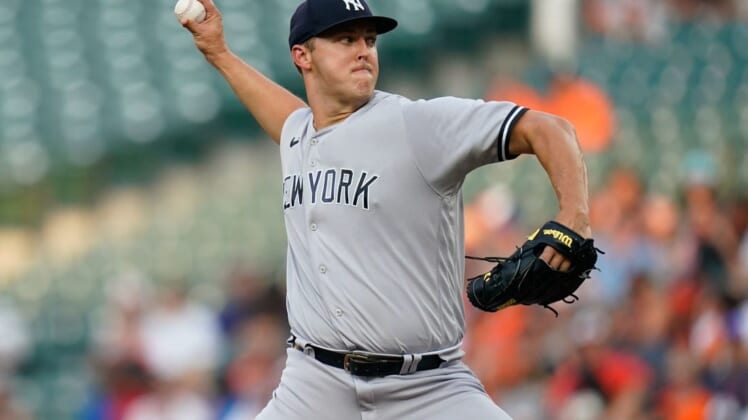 Aaron Judge belted a pair of homers to help the visiting New York Yankees record a 7-6 victory over the Baltimore Orioles on Friday.

Judge launched his second three-run homer in as many days in the third inning and crushed a solo shot in the fifth. He has gone deep a major league-leading 36 times this season, with eight coming at the expense of the Orioles.

The Yankees snapped a four-game road skid by defeating Baltimore for the 10th time in 14 meetings this season.

Lucas Luetge (3-3) picked up the win after allowing one hit over 2 1/3 scoreless innings of relief of starter Jameson Taillon.

Anthony Santander launched a three-run homer off Aroldis Chapman in the seventh inning, however Clay Holmes got the final five outs — three via strikeout — to secure his 17th save of the season.

Yankees reliever Michael King left in the seventh inning with an arm injury.

Jorge Mateo had an RBI double and scored on Cedric Mullins’ single in the third inning for the Orioles, who had won 11 of 13 games prior to the All-Star break.

New York benefited from a two-out rally to open the scoring in the third inning. Gallo walked and DJ LeMahieu singled before Judge muscled a 2-1 fastball from Tyler Wells (7-6) over the wall in left-center field.

Baltimore answered in its half of the third as Ramon Urias singled against Taillon to lead off the inning and came around to score on Mateo’s double to left field. Mateo didn’t stay on second for long, as Mullins brought him home with a single through the Yankees’ shift.

The Yankees claimed a 4-2 lead after Donaldson doubled to left field and came around to score on Trevino’s double to deep right-center field.

Judge flexed his muscled again in the fifth inning by depositing a 2-1 changeup from Wells over the wall in center field.

Hayes scored on a groundout in the sixth inning, however Gallo answered in the seventh by sending a first-pitch changeup from Joey Krehbiel over the wall in center field. The homer was Gallo’s 12th of the season and second in his last three games.