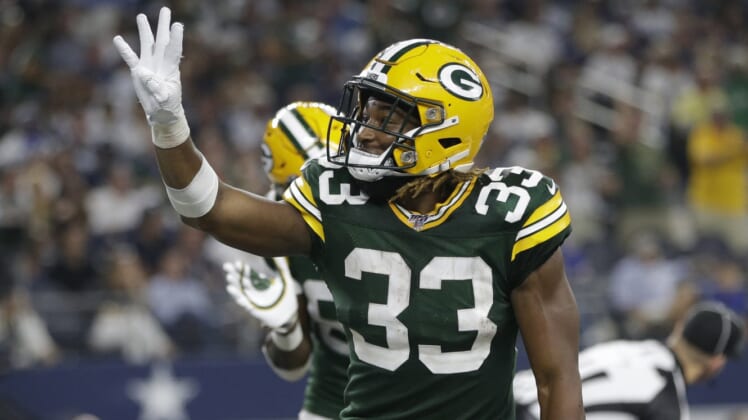 Speaking with the media after Sunday’s win over the Carolina Panthers, Rodgers said, “I know Christian (McCaffrey) is a very talented player, and he’s been mentioned in the MVP race, so maybe it’s time to start talking about Aaron Jones,” per Ryan Wood of the Green Bay Press-Gazette.

Jones rushed for 93 yards and three touchdowns as the Packers edged the Panthers on Sunday. Now with 14 touchdowns from scrimmage this season, he is tied with McCaffrey for the league lead.

If any running back is going to win NFL MVP this year, it’s likely going to be McCaffrey. He has quite the edge over Jones when it comes to scrimmage yards, with 1,385 through nine games. Jones has 943 yards through 10 games. So there’s a significant discrepancy there.

Additionally, the Panthers don’t have the luxury of having an Aaron Rodgers under center every Sunday. Yet it’s still pretty awesome for a former NFL MVP like Rodgers to be showering his young running back with this kind of praise.