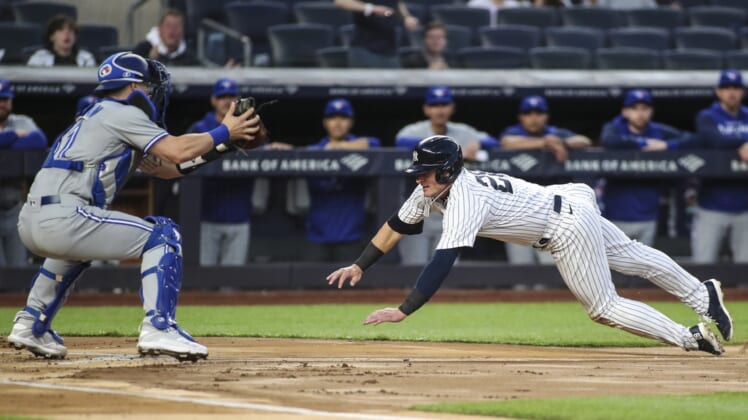 Aaron Hicks hit a two-run homer and Nestor Cortes combined with four relievers on a five-hitter as the New York Yankees ended a five-game home losing streak to the Toronto Blue Jays with a 4-0 victory on Tuesday night.

New York’s offense did not generate much, but it scored first for the first time this season.

DJ LeMahieu had two hits and also scored on a throwing error as the Yankees beat the Blue Jays at home for just the third time in 12 meetings since the start of last season.

Giancarlo Stanton hit a sacrifice fly in the eighth.

Cortes went the first 4 1/3 innings and allowed three hits. He struck out five, walked none and threw 72 pitches.

Cortes saw his night end when he allowed a double to Chapman. Clay Holmes (1-0) followed with 1 2/3 perfect innings and Miguel Castro worked around a two-out error in the seventh.

Jonathan Loaisiga allowed two hits but ended the eighth by retiring Vladimir Guerrero Jr. on a groundout. Aroldis Chapman struck out two in a non-save situation in the ninth.

Toronto’s Yusei Kikuchi (0-1) allowed three runs — two earned — on five hits in 3 1/3 innings. He struck out two, walked two and threw 84 pitches in his debut for the Blue Jays.

After Josh Donaldson was thrown out at the plate by right fielder Teoscar Hernandez trying to score on Anthony Rizzo’s double in the first, LeMahieu opened the second with a double and took third on a wild pitch.

Hicks then hit a 2-0 slider into the right-center-field seats. It was the first homer since April 30 against Detroit for the outfielder, who underwent left wrist surgery on May 26 and appeared in just 32 games last season.

Consecutive one-out singles by LeMahieu and Gleyber Torres put runners at first and second, and the Yankees capitalized on a throwing error by Toronto catcher Tyler Heineman to take a 3-0 lead.

Heineman tried to pick Torres off first, but his throw sailed over Guerrero’s head into right field and LeMahieu scored.