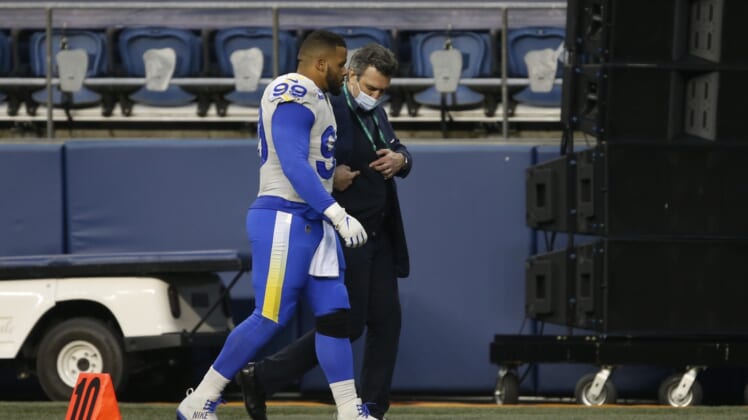 De’Vincent Spriggs filed a criminal complaint in Pittsburgh on Wednesday, alleging through attorney Todd J. Hollis that he needed 16 stitches and suffered a broken orbital bone, broken nose, concussion and a significant arm injury in a 3 a.m. bar fight Sunday.

He told ESPN on Friday that Spriggs started the fracas by digging his elbow into Donald’s back, then swinging a beer bottle over Donald’s head.

“As he ducks, somebody from behind grabs him to stop him from interacting with this guy, Mr. Spriggs, so he holds Aaron back in a sense,” White said. “At that point, that’s when other people come to Aaron’s aid and defend him by removing, so to speak, Mr. Spriggs from the area where he is punched, and he is fighting; it’s a mutual fight at this point between other individuals who Aaron does not really know.”

The Rams issued a statement confirming they were aware of the incident and were gathering more details.

Donald, 29, was a college star at Pitt and a first-round draft pick of the Rams in 2014. The three-time NFL Defensive Player of the Year works out in Pittsburgh in the offseason.