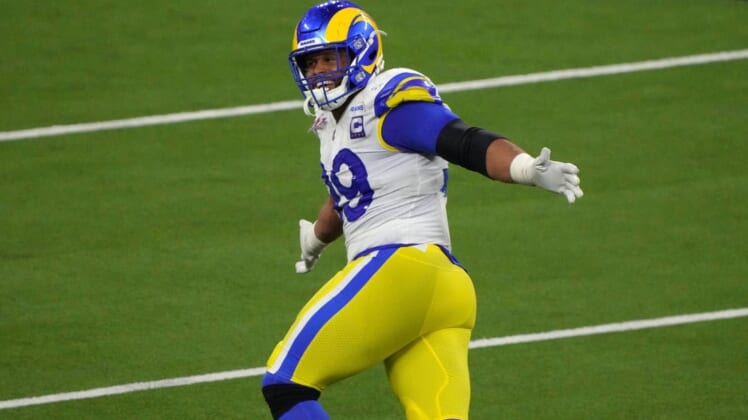 Los Angeles Rams star defensive tackle Aaron Donald skipped the team’s organized team activities while negotiations continue for a rich contract extension. And in the meantime, the future NFL Hall of Fame member is busy building his brand off the field.

Donald told the “I Am Athlete” podcast that he has signed with Donda Sports, a new marketing agency founded by rapper and entrepreneur Kanye West. Donda Sports will work with Donald on off-field endeavors both now and post-career.

“(Hearing) the whole spectrum of everything that was going on, what they were going to be bringing, the family atmosphere that they got, for me, it was a no-brainer,” Donald said of what drew him to Donda Sports. “I think it’s a hell of an opportunity to open up a lot of different doors and a lot of different things outside of football that I wanna be involved in. … To be a part of that, and be one of the first athletes to be a part of that, it’s pretty dope. We’re excited about it, and we’re gonna see where this thing goes.”

Donald, 31, has three seasons remaining on a six-year, $135 million deal he signed in August 2018 and is set to receive a combined $37.25 million in base salary over the next three seasons. A 2014 first-round draft pick by the Rams, he’s a seven-time All-Pro and has been named NFL Defensive Player of the Year three times.

When asked about Donald’s absence at OTAs last week, Rams coach Sean McVay there was no cause for worry. Donald, as is his typical, has been training on his own in Pittsburgh near family.

“He’s done a great job of communicating, with my relationship with him, and he gets a chance to spend time with his family right now, so I feel good about that,” McVay said.