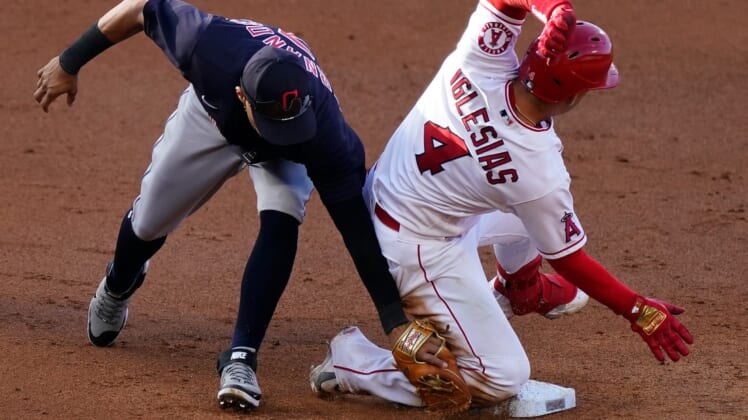 Aaron Civale pitched seven strong innings and got just enough offensive support to lead the Cleveland Indians to a 3-2 victory over the Los Angeles Angels Wednesday in Anaheim, Calif.

Civale (6-1) made 114 pitches in his seven innings, allowing two runs on four hits and one walk, striking out eight. His six wins leads the American League, and he lowered his ERA to 3.30.

It was a good bounce-back game for Civale, who had his worst start of the season in his previous outing last Friday against Seattle when he allowed five runs in 6 2/3 innings, getting his only loss.

Franmil Reyes and Amed Rosario each had two hits for Cleveland, which also got a productive performance from Jose Ramirez, who singled, walked, scored two runs and stole two bases.

Angels starter Shohei Ohtani got a no-decision after throwing 4 2/3 innings, giving up two runs on five hits and two walks. He struck out five, and his fastball velocity was down from its usual upper-90s mph, topping out at 95. Ohtani went 1-for-3 at the plate with a bunt single.

Indians closer James Karinchak pitched a scoreless ninth for his fifth save.

Ohtani struck out the first two batters of the game, but gave up a two-out single to Ramirez, who then stole second. Reyes followed with a double to drive home Ramirez for a 1-0 Cleveland lead.

The Angels tied the game against Civale in the third inning after David Fletcher tripled with two outs and scored on a double by Jose Iglesias. It was Fletcher’s first game back after missing the previous three with a sore hip.

The Angels took their first lead of the game on Jared Walsh’s one-out solo homer in the fourth inning, his eighth of the season.

Jake Bauers led off the fifth inning with a homer off Ohtani, tying the game at 2-2. But when Ohtani issued a two-out walk to Cesar Hernandez, Ohtani’s work on the mound was over. However, he did remain in the game, moving to right field.

The Indians took a 3-2 lead in the sixth thanks to Ramirez, who walked, took second on a Reyes groundout, stole third and scored on an infield single by Josh Naylor.