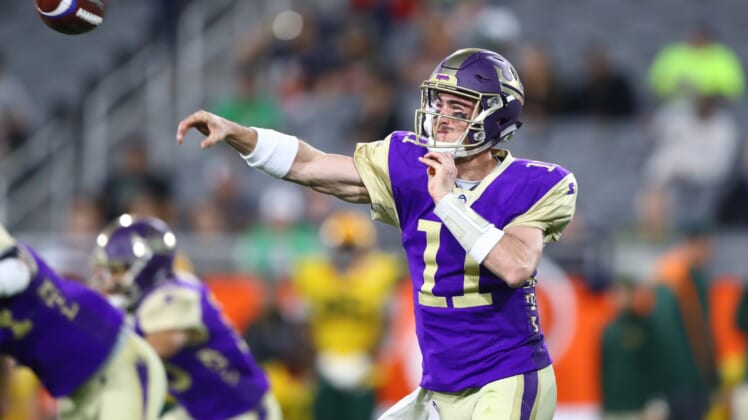 The Orlando Apollos remain the team to beat after another rousing performance in AAF Week 5, and thanks to a standout performance from Garrett Gilbert.

The quarterback got Week 5 started with a bang leading his Apollos to a 31-14 win over the Birmingham Iron as Orlando improved to 5-0 on the season. He leads off our weekly list of top performers around the AAF.

Gilbert has started all five games this year for Orlando, and Saturday’s was perhaps his best showing yet. The former sixth-round pick out of SMU was dealing, completing 23-of-35 passes for 286 yards with two touchdowns, no interceptions, and a couple of two-point conversions.

Garrett Gilbert to Charles Johnson for a touchdown over Jamar Summers, the likely best cornerback in the league pic.twitter.com/yAfxW5G4vB

Salt Lake quarterback Josh Woodrum had a miserable outing Saturday against San Diego, throwing three interceptions in a narrow two-point loss. The man who’ll live in his nightmares for at least a couple of days is Kelly, who tallied all three of those picks and scored a touchdown to help his team improve to 3-2 on the season.

Former Dallas Cowboys cornerback Kameron Kelly had three interceptions on Saturday, one returned for a touchdown. At 6-foot-2 and 205 pounds, it wouldn’t surprise me if he earns a tryout from the #49ers. Like @eric_crocker said, he fits their mold.pic.twitter.com/9IR4errINe

Orlando is getting some incredible play inside of late from Moten Jr. Heading into AAF Week 5, the defensive tackle had made five solo tackles and two sacks in the previous three games. Then on Saturday, he exploded with his best showing yet this season. Showing himself to be more than a big run-stuffer inside, the 6-foot-4, 315-pounder was all over Birmingham’s quarterbacks, registering two sacks.

After struggling for the first three weeks of the young season, the Legends finally have something going with Murray, who once again thrived in AAF Week 5. The former Georgia Bulldogs star has been just that for Atlanta the past two weeks, leading the Legends to wins in both games.

Aaron Murray finds Tarean Folston for six and this game is TIED at 20 in the 4th quarter. pic.twitter.com/kdMjwz0aFs

On Sunday, Murray completed 27-of-43 passes for 306 yards with a touchdown and one two-point conversion. Combined with his performance last weekend, he has 627 combined yards in his last two games.

A featured player on this list for the second time in three weeks, Pierson-El had a monster game against San Diego. The 23-year-old undrafted receiver out of Nebraska hauled in eight of the nine passes that came his way for 130 yards.

He’s been inconsistent this year for Salt Lake, but given the way he’s shown up recently, it wouldn’t be surprised if Pierson-El got an invite to an NFL training camp later this year.

Folston was the breakout player of AAF Week 5, without a shadow of doubt. Coming into the game against Memphis Sunday, he had a grand total of 152 yards and zero touchdowns to his credit through the first four games this season.

Tarean Folston gets his own TD on the ground, and the Legends are back on top. pic.twitter.com/9SASi9Fciy

On Sunday, Folston not only scored both offensive touchdowns of the game for Atlanta but also racked up 106 yards from scrimmage. That’s how you make a name for yourself. Between Folston and Murray, Atlanta’s offense is starting to get into a groove.

The Commanders jumped out to a 26-0 lead at halftime Sunday night against Arizona, in large part due to the play of Woodside, who couldn’t miss. Heading into the locker room, he had already racked up 192 yards and two touchdowns on 12-of-13 passing.

Two of his passes went over 50 yards as the big play was working well.

They don't call him Big Play McKay for nothing.. Logan Woodside to Mekale McKay, 55 yards for the score! #SAvsAZ pic.twitter.com/kWC3Ybrn4p

Arizona woke up after halftime, and Woodside cooled off a bit. Yet when it was all said and done, the former Toledo star finished with finishing the day with 290 yards through the air on 21-of-27 passing as San Antonio won, 29-25.