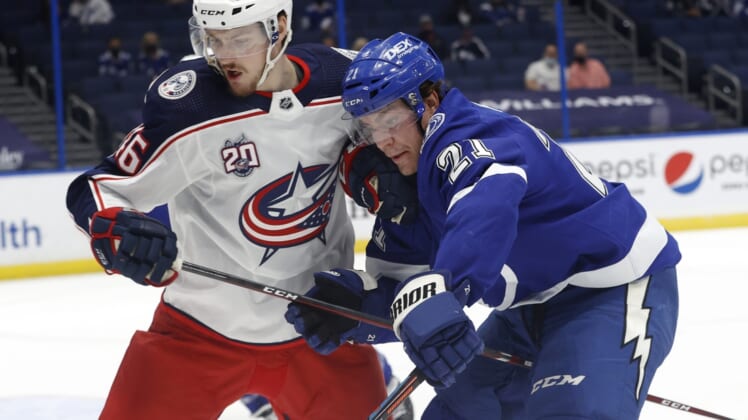 With Columbus up 1-0 and on a strong rush in the second period, Alexandre Texier split the Lightning defense and dished a short pass to Savard, who potted the marker at 19:28 for a 2-0 lead.

The tally was the defenseman’s first since April 10, 2019 — a stretch of 123 games — in Game 1 of the first round of the Eastern Conference playoffs as the Blue Jackets ultimately swept the Presidents’ Trophy-winning and top-seeded Lightning in four games.

Earlier in the second period Tuesday, Oliver Bjorkstrand notched his 13th goal on a deflection to put the visitors on the board first at 10:49.

Cam Atkinson scored an empty-net goal — also his 13th — at 18:29 of the third to help the Blue Jackets end a four-game winless streak and improve to 2-0-1 against Tampa Bay.

Defenseman Dean Kukan played in his 100th NHL contest, and pairing partner Mikko Lehtonen made his Columbus debut and appeared in his 10th career game overall.

Mathieu Joseph scored a goal, and defensemen Luke Schenn and Andreas Borgman recorded assists for the Lightning, who lost their third straight for the first time this season.

In his eighth appearance this season, backup netminder Curtis McElhinney slid into the crease and made 18 saves on 20 shots for Tampa. Defenseman Victor Hedman produced a career-high 10 shots.

After a penalty-free first period, the Lightning avoided a major setback when Hedman was tripped up by Lehtonen behind Merzlikins’ net and had his right leg smack awkwardly into the end boards at 5:57.

The 2018 Norris Trophy winner had to be helped off the ice by the training staff and was favoring his leg. However, he soon returned to the bench after a few minutes and slid back into his regular spot as the club’s No. 1 defenseman.

At 4:12 of the third, the Lightning finally scored when Joseph’s deflection of Schenn’s long shot struck Columbus defenseman Vladislav Gavrikov and went in for Joseph’s 10th goal to make it 2-1.