A.J. Green: ‘All the receivers are getting bank’ 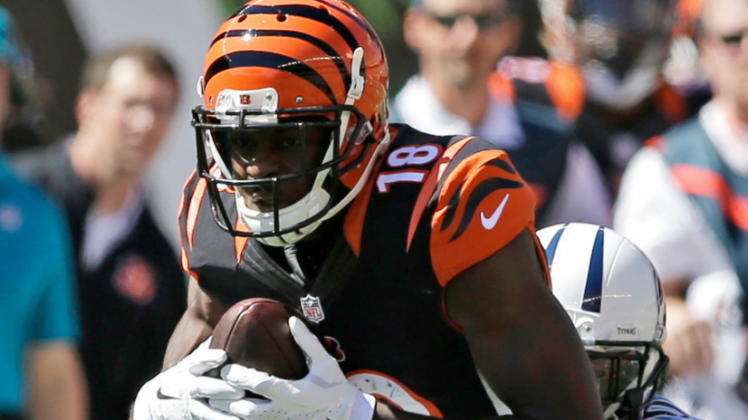 A.J. Green hopes to see dollar signs in his future.

With Atlanta Falcons star wide receiver Julio Jones inking his monster five-year $71.25 million deal on Saturday, it will soon be time for the Cincinnati Bengals to take care of Green.

He commented on his current contract status as it relates to Jones’ new deal but didn’t seem overly excited about his chances of getting similar treatment before the start of the season:

“It’s good for him,” Green said, via the Cincinnati Enquirer. “We will see. If it happens, it happens. If it don’t I’ll go out there and play. We’ll see.”

Green remains the last of his class on the list of top receivers due a whopping payday. Over the past couple of months, Demaryius Thomas, Dez Bryant and T.Y. Hilton have all secured lucrative five-year deals.

Green will be playing out his fifth-year option of his original rookie contract. He is on course to earn $10.18 million this year, which equates to the average salary of the 10 highest paid wide receivers from 2014. He is easily one of the most talented receivers in the league and for that, he is in line to nail an extension somewhere in the $70 million neighborhood similar to the recent deals of his fellow wide receivers.

Well aware of that fact, Green appears to be patient his day will come.

“All the receivers are getting bank so we will see if I get there.”

Thus far in Green’s four years with the Bengals, he has averaged 82 catches, 1,218 yards and 8.7 touchdowns per season.

Green has stated in the past that he makes plenty of money and a new deal will come when it’s the right time. For now, it sounds like he doesn’t plan to cause any drama about his contract status.