A.J. Green on Contract: ‘I’m Not Here For the Money, I’m Not Broke’ 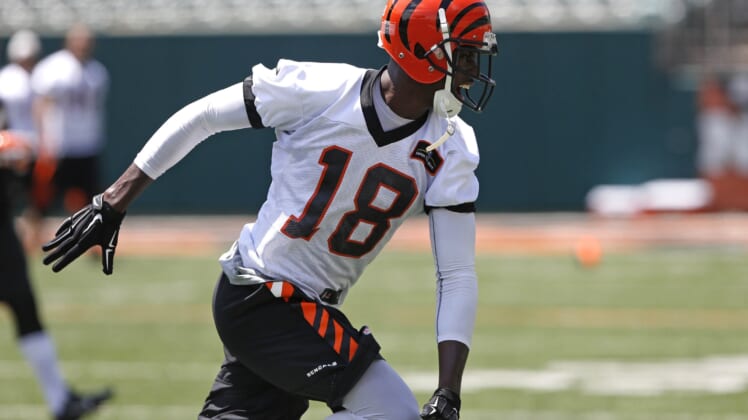 Cincinnati Bengals wide receiver A.J. Green will see his rookie contract expire after the 2015 season. While he’s set to earn over $10 million without any guarantees following the year, Green doesn’t seem to be too worried about his contract status.

“I don’t get into all the ‘I need a contract’ stuff,” Green said, via ESPN. “I’m not here for money. I’m not broke. So I’m fine. I can wait until the end of the year to get a contract, but I know that time is coming.”

It’s an interesting attitude for a 26-year-old receiver that has been among the most successful in the NFL since he entered the league back in 2011. The idea that he’s not wanting for money is something other young players might want to take note of.

By remaining patient and doing everything asked of him, both on the field and off the field, Green is setting himself up for a rather large payday by the Bengals when the time comes following the 2015 season. It’s a completely different strategy than the one being utilized by Demaryius Thomas and Dez Bryant, both of whom refused to take part in their team’s offseason activities.

“You know I watch ESPN all the time, and that’s all they talk about. But like I say, I’m just here to play football. My body of work will speak for itself.”

Green is coming off an injury-plagued 2014 campaign that saw him record 69 receptions for 1,041 yards and six scores in 13 games. In four seasons with the Bengals, Green is averaging 82 receptions, 1,219 yards and nearly nine touchdowns per year. He’s also put up a Pro Bowl performance and 1,000-plus yards each season.

There’s little doubt that Green will find himself among the highest-paid receivers in the NFL in the not-so-distant future. It just remains to be seen when that will happen.