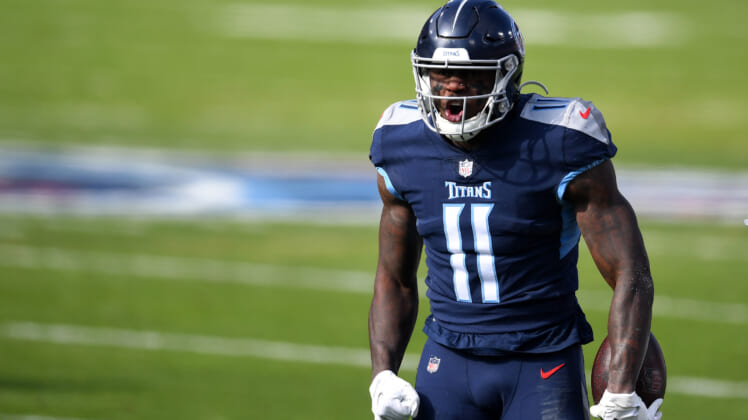 Brown has joined the likes of fellow 2019 draft mates Deebo Samuel and Terry McLaurin in deciding to skip voluntary team workouts this week.

For the former Mississippi star, it’s all about cashing in big time. He’s eligible for an extension for the first time in his career. Meanwhile, the NFL wide receiver market is completely out of control right now. It’s led to youngsters wanting to get paid.

Apparently, Brown has opted to negotiate with the Titans through social media. The former second-round pick sent out a not-so-cryptic tweet on Monday, seemingly blasting the Tennessee organization and its fans.

It also must be noted that Brown deleted any mention of the Titans from his Twitter and Instagram accounts.

We’ve seen similar actions from both the aforementioned Samuel and Arizona Cardinals quarterback Kyler Murray, both of whom are also in line for what would be massive contract extensions.

Related: How an A.J. Brown trade to the Green Bay Packers might look

What’s going on with A.J. Brown and the Tennessee Titans?

It’s clear that this social media activity is a new negotiating tactic for players. Whether it even creates any type of impact within the Titans’ organization remains to be seen. But it’s obvious that Brown is attempting to prove a point.

As a second-round pick back in 2019, Tennessee does not hold a fifth-year option on Brown’s contract. Hence, why it is important for general manager Jon Robinson to get something done on this front.

Brown recorded consecutive 1,000-yard seasons to open his career. He was still able to put up 869 yards despite missing four games to injury during the 2021 campaign. The dude is legitimately well on his way to becoming one of the better receivers in the NFL.

The moral of this story is that Brown is vastly underpaid in the grand scheme of things. That can’t be argued.

From Tennessee’s perspective, there’s certainly some financial hurdles to overcome if the team is going to be able to pay Brown the $25-plus million he’s worth annually.

The Titans are currently just $2 million under the 2022 NFL salary cap and has to worry about signing their rookies to deals once the annual event concludes early next month. They also have two of the highest-paid skill-position players at their positions in the NFL.

Quarterback Ryan Tannehill is slated to count $38.6 million against the cap in 2022 with a cap figure of $36.6 million in 2023. Meanwhile, Derrick Henry is the highest-paid running back in NFL history.

It’s certainly desirable for the Titans to have a three-headed monster on offense in that of Tannehill, Henry and A.J. Brown. The question here is obviously financial. And in reality, it could lead to a further rift between the Pro Bowl wide receive and his organization moving forward.