A Humble Josh Jacobs Gives His Rookie Campaign a “B” Grade 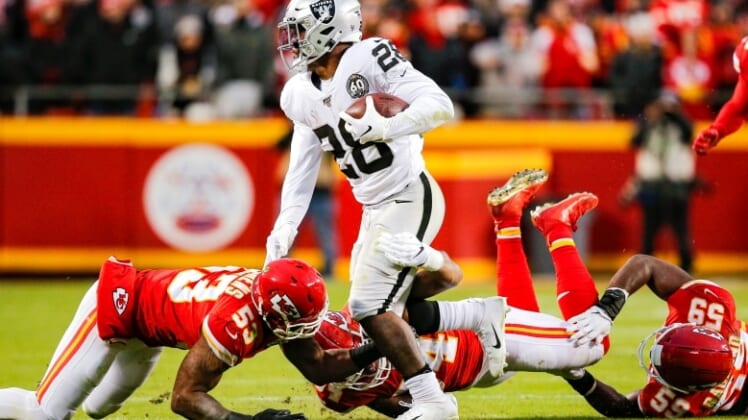 Saying he left a lot on the field in 2019, Las Vegas Raiders second-year running back Josh Jacobs says he can and will do better.

But don’t tell Josh Jacobs that. The humble running back met with the media in Henderson at training camp on Wednesday and proved to be his own sharpest critic. When asked how his rookie season went and what letter grade he’d give it, Jacobs answered quickly.

“I would say a ‘B,’ Jacobs said. “Its a lot of yards I feel I left on the table. There’s a lot of plays I feel like I could of contributed more.”

Josh Jacobs said he’s been working hard on learning how to run routes more effectively, including those by wide receivers to give his game more versatility.

When asked about his fractured shoulder, he played with during last season, Jacobs said he’s fully healed and feels better than he has in a long time.

“I don’t feel the shoulder (injury) at all,” Jacobs said. “I’ve been doing heavy reps all summer…this is the best my body has felt.”

Josh Jacobs also said he’s lost weight from last year and is ready to practice despite raising eyebrows by missing the first day on Wednesday. Jacobs said the only reason he missed the workouts was due to adjusted schedules with COVID-19 restrictions and the shorter offseason.