A Farewell and Thank You 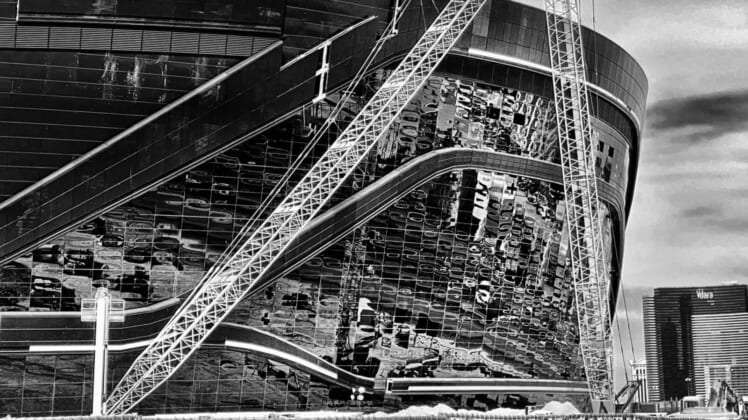 After four years of serving as Las Vegas’ only independent news source covering the Las Vegas Raiders, we’re riding into the sunset and will merge our Raiders coverage with Las Vegas Sports Daily on the new Las Vegas Sports Today.

Well, it’s been one heck of a ride Raider Nation.

What started as a website in March of 2017, and turned into a great independent news brand, a daily radio show on the Las Vegas Raiders flagship station Raider Nation Radio, will ride into a Mojave Desert sunset on May 1st as we will be ceasing publication of the website and ending the long-running podcast/radio show the same day.

As part of Silver and Black Today’s evolution, our coverage and continued coverage of the Raiders will now occur on the soon-to-be-launched VegasSportsToday.com – a merging of our site and local entrepreneur Mike Dixon‘s VegasSportsDaily.com site. As a continued venture of The Publisher Desk Network, the new site will cover the Raiders, Golden Knights of the NHL, combat sports, and even e-sports. More to come on that at a later time.

Mike and I share a similar vision for sports coverage in Las Vegas and I am excited about partnering with him and our friends at TPD for this new site.

When I started this venture, it was to get back into covering sports and writing for me. I had a long and successful career in public relations and digital marketing at the corporate level but wanted to get back to creating content around something I love – sports. As a recovering San Diego Chargers fan, I was embracing the Raiders because they were moving to Las Vegas. My wife was born and raised here, and one of my children was born here. I was a UNLV graduate and Las Vegas meant a lot to me and my family. The community is special and the fact an NFL team was moving here was something I wanted to help happen and cover.

After four years, as I walk away from it, I am proud of what we built. Not everyone liked it – there are plenty of haters and those who were never on board. They are everyday fans, other journalists, disgruntled former contributors, (I’m sure even some team officials) who thrust negativity upon the enterprise. Either way, we found our audience and they found us. Our approach wasn’t that of a fan site. There were no “ours” and “we” here. This was always meant to be a journalistic endeavor to the best of our abilities. I always imparted on our contributors the focus on objectivity. I think we did a good job of that. That’s clear by many who didn’t care for that approach – instead, they just wanted to hear “rah-rah” commentary or the opposite – constant criticism.

Still, those of you who stuck around, you stuck around. We were never close to being the biggest site out there and that was never our intent. But we were independent and that led to some great content. As a small fry, we struggled, at times, with the volume of content we wanted to bring you. But, in the end, there was some phenomenal work. You can see it in how many sites, podcasts, and radio shows quickly mimicked our format or approach, or quickly jumped on guests we first introduced to Raider Nation. To me, that’s the ultimate compliment.

Despite the ongoing attempt to poach advertisers, the healthy competition and genuine community built around Raiders content producers was great to be part of. There are some really great people in traditional media and independent and fan-based media. It was a pleasure working besides most of them and I will remain ardent and steadfast consumers of their Raiders content as I move on.

Most of all, the greatest satisfaction I got from this entire business and brand was that of dealing with our contributors both on the website and radio/podcast. I don’t need to tell you how talented some of them are. You know it by reading their work, listening to their appearances, and understanding their professionalism and skill set. People like Moe Moton, Evan Groat, Noah Strang, Nick Cothrel, Chaz Osborne, Kelly Kriner, and my former radio co-host Q Myers. They’re all talented people who brought with them the energy and ability and believed in our vision. They will remain lifelong friends and it’s hard to fully express how much I appreciate their efforts, work, and promotion of the brand. Without them, we wouldn’t have enjoyed the success we did.

What I am most proud of is our independence as a source covering the Raiders. In today’s media landscape, it’s almost impossible for independent media to make it. While I have friends and colleagues at big corporate media, that’s what the media landscape is today – massive behemoths who control the flow of information. It’s hard to make a wedge and get in. I think we did, in our own small way, and that’s something I know we’re all proud of. Still, support the small guys. The state of journalism is in a precarious position right now. It’s struggling and it’s lost its way too. Still, there are great writers, podcasters, radio hosts, and more out there doing great work covering the Raiders.

The work and investment I put into Silver and Black Today was supported by some amazing businesses and champions who believed in my vision and were willing to put their money behind it. Starting with Tommy White at the Laborers Local 872, and Nevada’s best young criminal defense attorney in Michael Troiano, they were the first onboard. In fact, Local 872 was our first website advertiser and stuck with us including on Raider Nation Radio. Troiano did the same. I will be forever thankful for their early and undying support.

Later, we were fortunate my friends Dr. Jen and Andrew Marrone of Dr. Jen’s Ultimate Protein bars found their way to us. They not only were great supporters of ours on Raider Nation Radio, but both have become great personal friends. Truly amazing people and I value their friendship more than anything.

When we launched on Raider Nation Radio last August, the first person to come to me and want to be our title sponsor was my good friend Sam Mirejovsky of Sam and Ash – the Injury Attorneys. Both Sam and Ashley Watkins were an important part of the show and I will miss them very much. When I read their ads each day I meant what I said – they are my attorneys and I never promoted any person or product I didn’t believe in. Sam and Ash are great examples of people who care.

Most of all, I’ll miss all of you – the readers and listeners. When I left the air in February, I was overwhelmed with the outreach, comments, direct messages, and phone calls from emotional readers and listeners. More than anything, that meant the world to me. That meant we had done something of value that connected with those who appreciated what we did. I never did any of this to be part of a media club or insider cabal. I loved doing it and only wanted to have the work speak for itself. The feedback I got proved the team accomplished that and I walk away with my head held high and a sense of pride that can never be diminished.

Change is the only constant and I tend to be a person who embraces it. There’s lots of change on the horizon as my family and I get ready to move away from Las Vegas and to the midwest for new opportunities and new adventures. While I am proud of my professional work outside of Silver and Black Today, my six years back in Las Vegas (my second stint!) will be defined by this experience. I truly enjoyed all of it.

The Raiders in Las Vegas is a match made in heaven. I will continue to root for their success in Sin City and will keep my eyes closely on the team’s development and do so by reading and working more behind-the-scences on the new VegasSportsToday.com. I’ll be in a new time zone but you’ll still see me around online if you dare.

Again, thank you for being with us the past four years and for all those who helped.

It’s goodbye for SilverandBlackToday.com, but not for our Raiders coverage. Make sure to get ready for the launch of VegasSportsToday.com very soon!