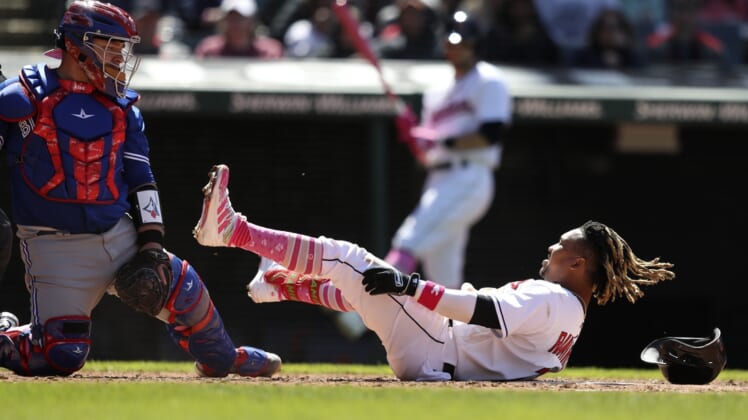 Light-hitting outfielder Oscar Mercado drove in the go-ahead run with two outs in the bottom of the eighth inning to propel the Cleveland Guardians to a 4-3 victory over the visiting Toronto Blue Jays on Sunday.

The Guardians reached the .500 mark by winning their seventh game in the past nine contests. They won three of four games in the series.

Cleveland pushed across two runs in the eighth inning, which started with a solo home run by second baseman Owen Miller to the left-field bleachers off reliever Tim Mayza. It was his third home run of the season.

Cimber (4-2) allowed his first walk of the season to Andres Gimenez, setting the stage for Mercado. He is batting just .191, yet drilled a single into center field, which drove home Reyes with the winning run.

Closer Emmanuel Clase recorded his sixth save with a scoreless ninth inning.

Set-up man Bryan Shaw (1-0) earned the victory with a hitless eighth inning for the Guardians.

Toronto snapped a 2-2 tie in the seventh. Santiago Espinal led off the inning with a double down the right-field line. He moved to third on a fly ball and scored on a sacrifice fly by George Springer for a 3-2 lead.

Right-hander Eli Morgan pitched 3 1/3 innings of solid relief. He allowed just one hit — Espinal’s 10th double of the season — one run and no walks. He struck out three.

The Blue Jays jumped on rookie Konnor Pilkington, making his first major league start, for two runs in the top of the first inning.

The big hit was a two-run single by Teoscar Hernandez that drove in Springer and Bo Bichette for a 2-0 advantage.

Cleveland got to Toronto starter Alek Manoah in the third. Steven Kwan blooped a double down the right-field line and scored on a triple by Jose Ramirez. Ramirez is leading the majors with 30 RBIs.

Miller knocked in the Guardians’ second run with a sacrifice fly.

Both starting pitchers left with no-decisions. Pilkington, called up from Triple-A Columbus to make the start, pitched 3 2/3 innings and allowed three hits, two runs and three walks. He struck out six batters.

Manoah pitched five innings and allowed five hits, two runs and one walk. He struck out three. He threw 95 pitches, 61 for strikes.