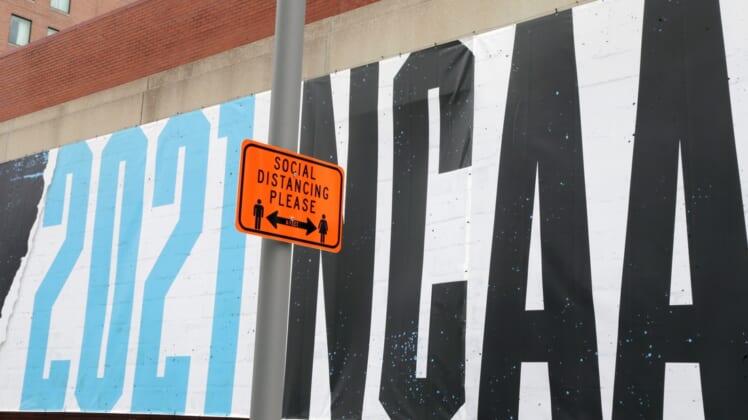 March 17, 2021; Indianapolis, IN, USA; A sign reminding people to social distance is posted in front of a promotional mural in downton Indianapolis as the city prepared to host the 2021 NCAA Division I basketball tournament on Wednesday, March 17, 2021. Indianapolis is hosting the entire tournament this year from the First Four to the National Championship game due to the coronavirus pandemic. Mandatory Credit:Barbara J. Perenic/Columbus Dispatch-USA TODAY Sports

Eight people have tested positive for COVID-19 this week heading into the start of the NCAA Tournament, ESPN reported Thursday.

The tournament begins Thursday night with four games: No. 16 matchups between Texas Southern and Mount Mary’s and Appalachian State vs. Norfolk State, and No. 11 seeds Drake vs. Wichita State and UCLA vs Michigan State.

The games will be played at Assembly Hall on the Indiana campus and at Mackey Arena at Purdue. All 67 games in the tournament are being played in and around Indianapolis.

The NCAA did not disclose whether the positive tests came from players, coaches, officials or other team personnel.

The exception is defending champion Virginia, who won the tournament in 2019. The 2020 tourney was not played due to the pandemic.

The Cavaliers, seeded fourth in the West Region, pulled out of last week’s ACC tournament semifinals following a positive COVID-19 test. Most of the Virginia team remains in quarantine in Charlottesville, Va.