8 players who matter most during NFL conference championships

Winning a conference championship is a matter of collective execution, but each remaining NFL team has one offensive and defensive player who can provide an extra boost.

Although some of the names are familiar, at least half of them are an underrated or lesser-known talent for the casual fan. The following players will likely hold a significant role in the outcomes on Sunday. 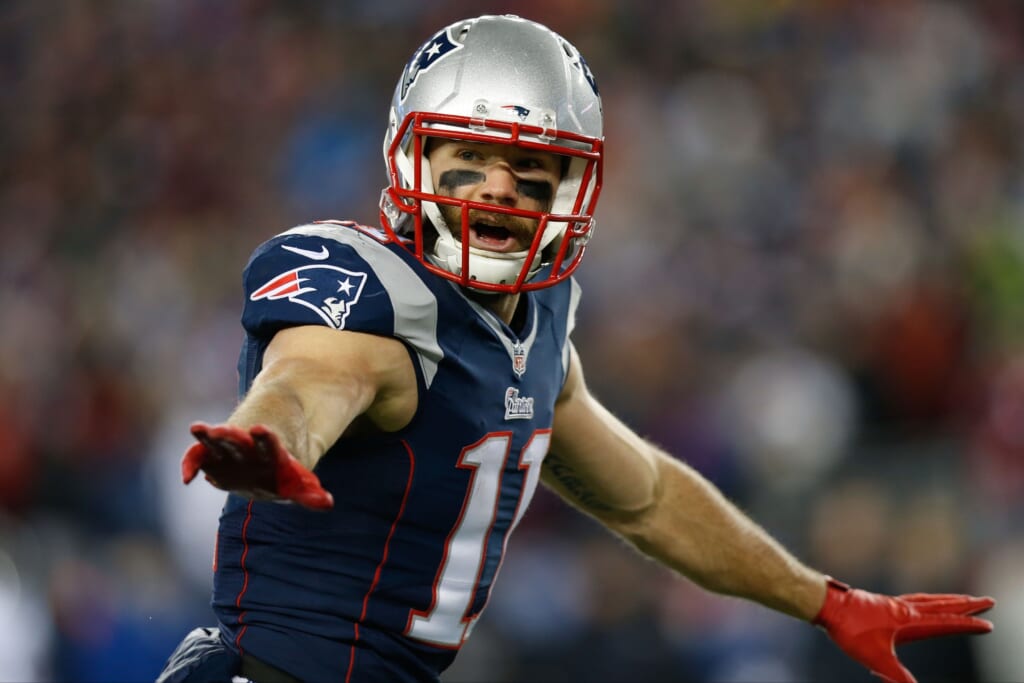 New England’s offensive line needs help. The best way to counteract shaky pass-blocking is to get rid of the ball quicker than the defense can possibly disrupt the pocket.

Tom Brady has one of the snappiest releases in NFL history. But that twitchy mind and arm don’t matter if someone like Julian Edelman hasn’t created separation within two seconds of the snap.

After missing the last seven games of the regular season — including the bout against the Denver Broncos — Edelman notched 10 receptions for 100 yards on 16 targets during the Divisional Round. But the Patriots No. 1 wideout also dropped at least three passes.

Giving the Broncos defense a chance to, as they say, pin their ears back to rush Brady in obvious passing situations is not conducive to sustaining drives. Edelman is bound to receive double-digit targets. He needs to make each catchable ball a reception, especially to set up third-and-short. 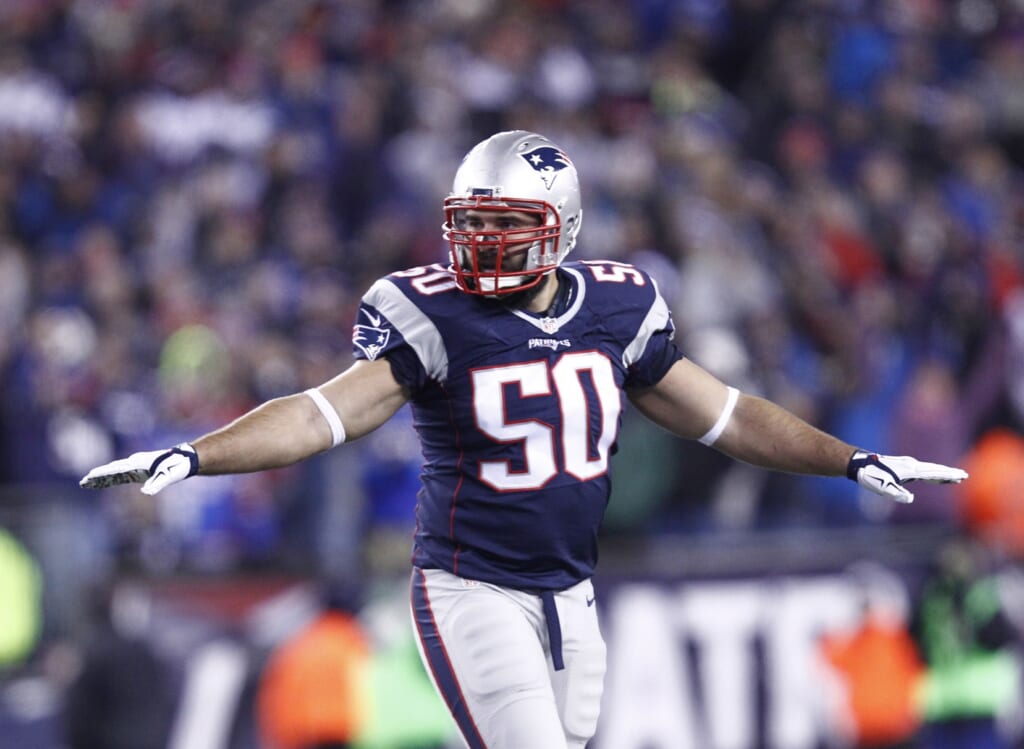 The main reason for C.J. Anderson’s game-winning 48-yard touchdown run was a certain alignment forced Brock Osweiler into an audible. Plus, it worked because defensive backs were forced to set the edge.

Denver’s inside-running game isn’t great. C.J. Anderson and Ronnie Hillman rarely burst through holes up the middle. The outside, though, can be a different story. Rob Ninkovich is a preeminent factor in preventing it from having a happy ending.

Ninkovich is far from a dominant piece, but he’s a steady contributor and constant presence. Bill Belichick clearly trusts the D-end. If that wasn’t the case, Ninkovich wouldn’t lead the unit in snaps.

Overall, Ninkovich spends time doing everything — defending the run, rushing the passer and dropping into coverage. He has the potential to impact the game in more ways than anyone on the Patriots defense. 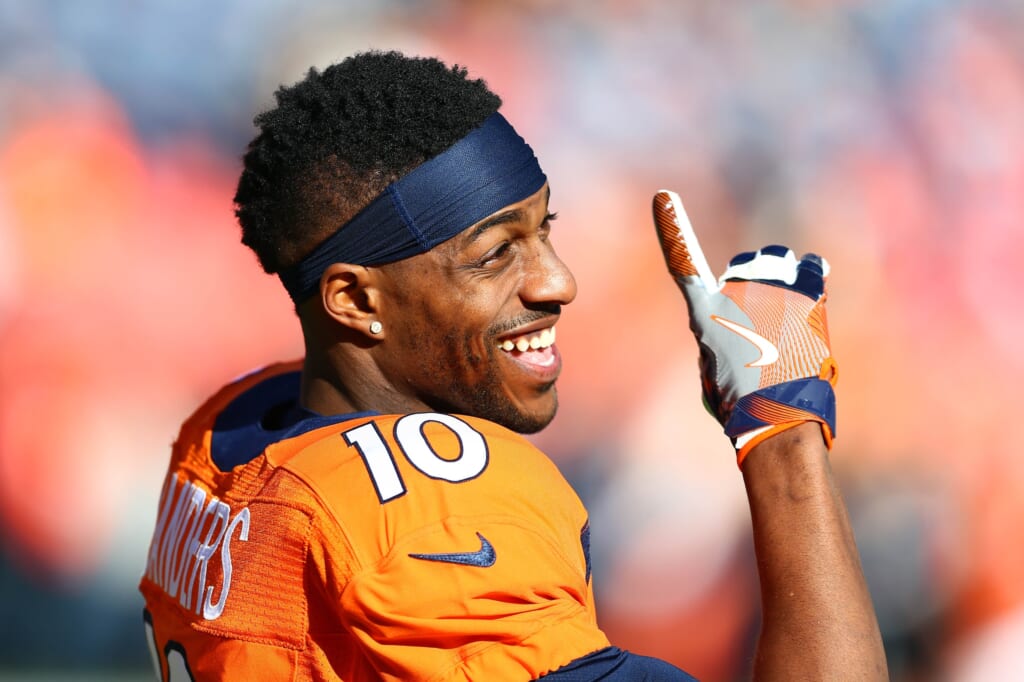 Demaryius Thomas is the physically imposing receiver, but Emmanuel Sanders is more dangerous. That was remarkably obvious during the regular-season meeting between the teams.

Osweiler sent nine targets Sanders’ way, and he caught six of them for 113 yards. As for Thomas, well, he managed a 36-yard catch on 13 targets. That would qualify as insane inefficiency, yes.

Plus — and this may come as a surprise — opponents regularly create their game plan to focus on limiting Sanders, not Thomas. After all, Sanders is Denver’s best downfield threat and a crisp route-runner.

New England will likely give Sanders the Malcolm Butler treatment. For the Broncos to beat the Patriots a second time, they’ll need Sanders to have another productive game opposite the top corner. 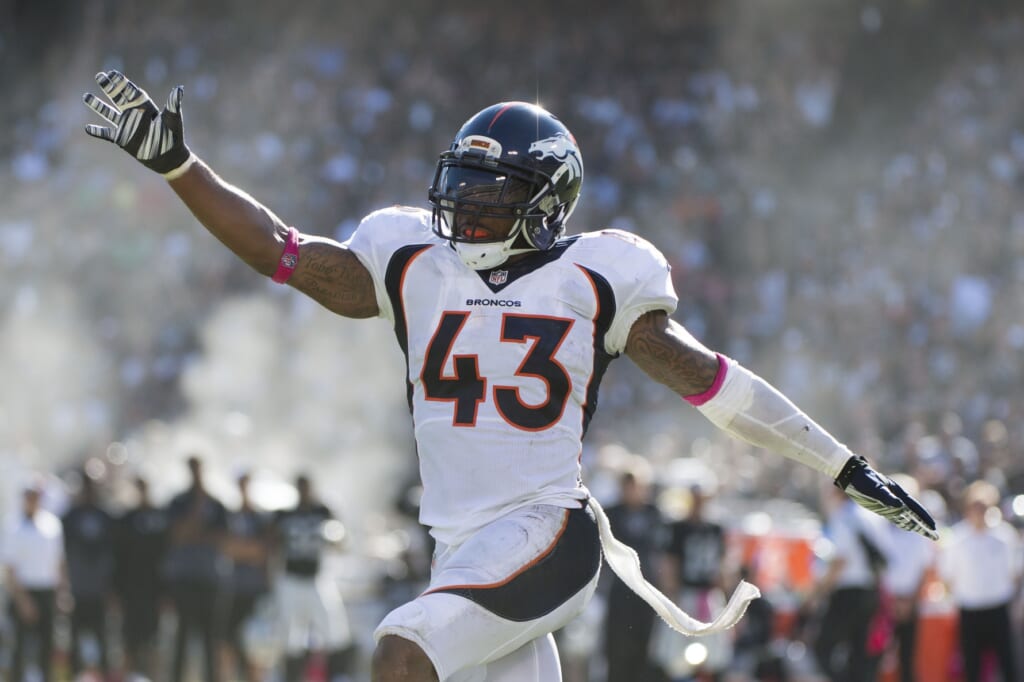 Both players are decent at stopping the run, but Ward has a higher calling. He’ll have the privilege to defend Rob Gronkowski. Good luck with that.

Now, Denver would be foolish to single-cover Gronkowski on a regular basis. However, defensive coordinator Wade Phillips loves to blitz, so Ward must be ready for the snaps he doesn’t have help.

Gronk’s numbers fall when Tom Brady is effectively pressured, but that’s a product of tight, physical coverage at the line of scrimmage. Ward must not allow Gronkowski to be a part of the quick-passing attack. 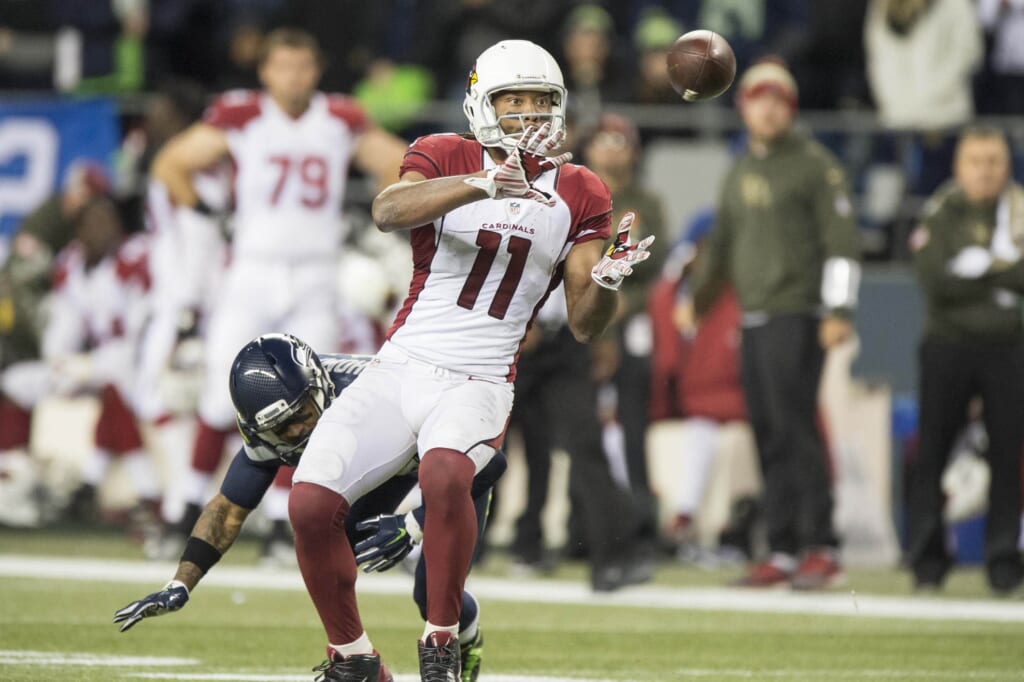 Perhaps the lone reason Arizona managed to avoid a stunning upset during the Divisional Round was Larry Fitzgerald.

The veteran receiver reeled in eight passes for 176 yards and notched the game-winning touchdown. His 75-yard gain set up that overtime score.

But Fitzgerald will occupy a crucial role against the Carolina Panthers. Most everyone knows about star corner Josh Norman, but he generally doesn’t chase receivers into the slot. Norman will likely defend Michael Floyd when Fitzgerald heads inside.

Instead, that honor probably goes to Cortland Finnegan. Seattle’s Russell Wilson completed 5-of-7 attempts for 73 yards when targeting Finnegan’s matchup. Fitzgerald is on the proper side of this mismatch. 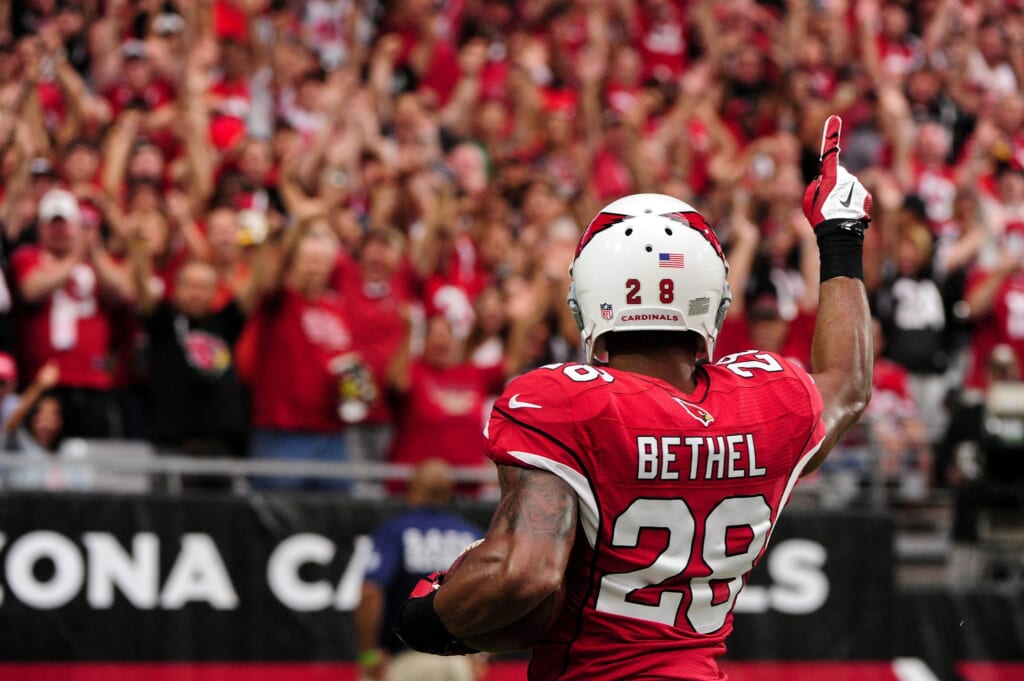 Justin Bethel was a regular name called during Arizona’s win over the Packers. That was not an ideal development.

Aaron Rodgers constantly picked on Bethel, who allowed five receptions, 93 yards and one touchdown on 10 targets. He also surrendered a 51-yard completion to Randall Cobb that did not count.

“It’s a new game. I’m not down on myself. What happened in the game, I can’t do anything about it. I just have to do better and try and help my team win the NFC Championship,” Bethel said, per the team’s official site.

Carolina’s receivers certainly aren’t an imposing bunch, but Jared Abbrederis and Jeff Janis aren’t exactly household names, either. The Cardinals need Bethel to bounce back from his rough outing. Otherwise, a deep threat like Ted Ginn Jr. may find a game-changing explosive play. 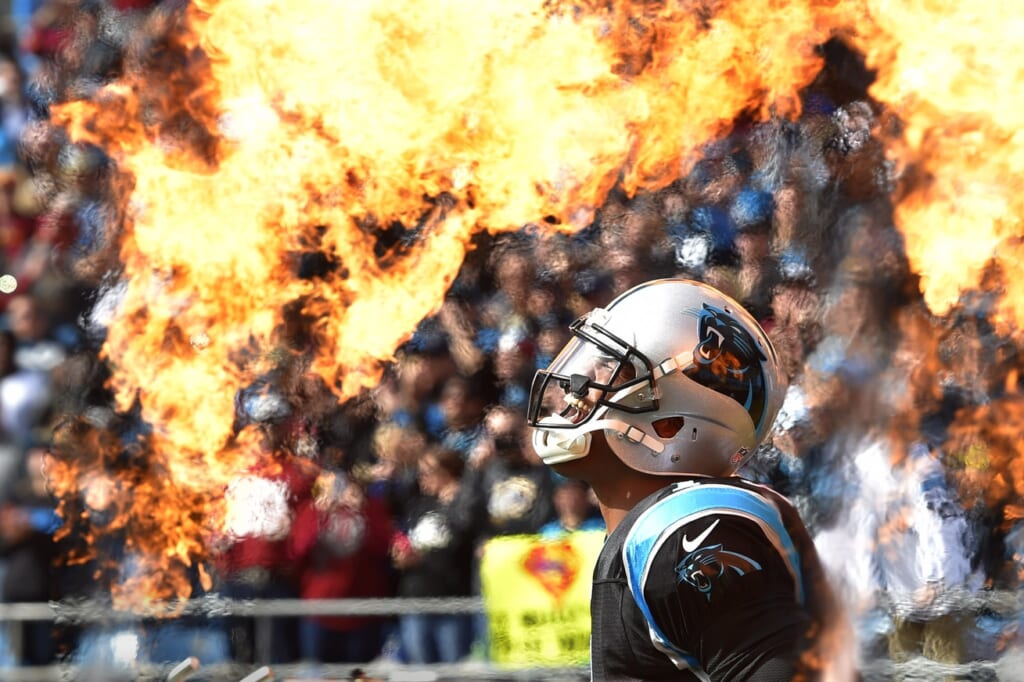 Carolina wasted little time and grabbed a jaw-dropping 31-0 lead on the Seahawks. It was a fantastic statement from a Panthers team that certainly felt disrespected heading into the contest.

But the Cardinals probably won’t let that happen again. Besides, expecting a dominant performance like that would be unwise. Fortunately for Carolina, it has this Cam Newton fella to guide the offense.

Newton will throw 20, 25 or even 30 times, but Arizona’s defense is vulnerable against mobile quarterbacks. His running ability can atone for a portion of the difficulties the Panthers may face against a stout front seven.

Additionally, Newton must help Carolina avoid a similar second-half lull that nearly cost the No. 1 seed a chance at the NFC Championship. The Panthers need a 60-minute effort, and Newton is their key. 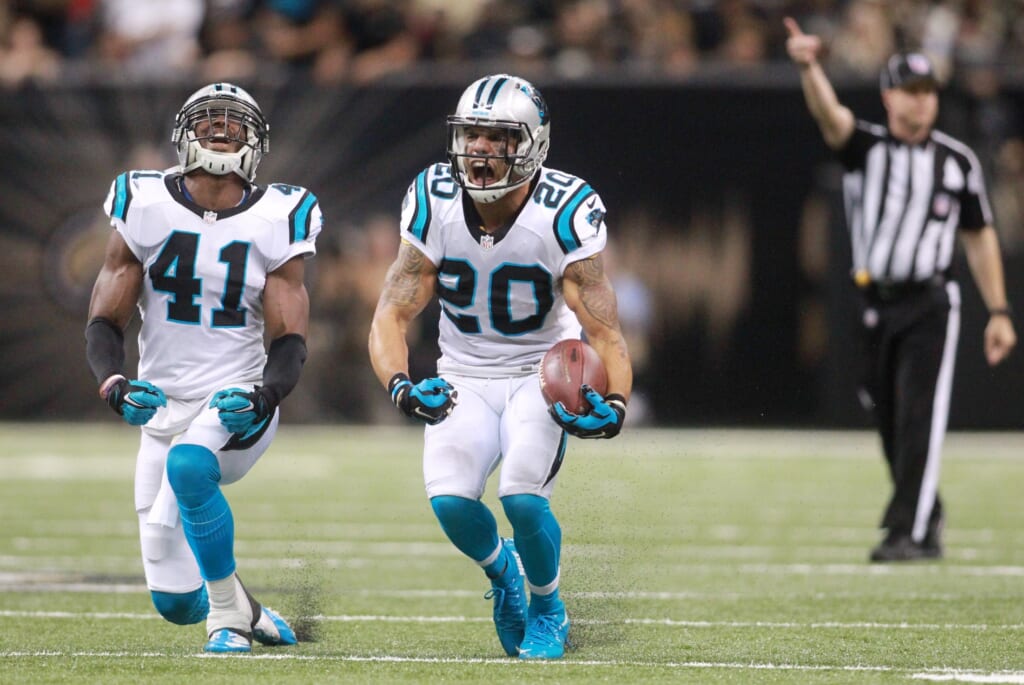 If you watched the NFC Championship, you might remember when Russell Wilson overshot a wide-open Doug Baldwin down the sideline. He created the space on a simple slant-and-go route.

Kurt Coleman was the player to blame. The aggressive veteran jumped the slant, leaving his responsibility as the last line of defense and instead becoming the first line of burnt safety.

Coleman cannot afford to let Arizona speedsters John Brown or J.J. Nelson do the same. Beyond the obvious reason of “that’s really bad,” it’s a safe bet that Carolina’s margin for error will not be as high.

The 27-year-old snatched seven interceptions during the regular season, so that aggressiveness can and has paid off for Coleman this year. Being smarter about the moment he takes that risk is critical.