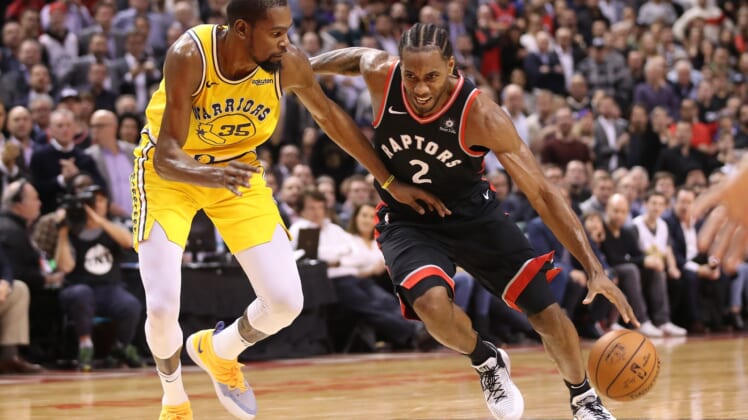 The 2019 NBA Finals between the two-time defending champion Golden State Warriors and the Toronto Raptors is about to tip off later this week.

The series itself provides a lot of interesting matchups. Toronto finished the regular season with a better record and has home-court advantage. Meanwhile, two injuries represent a major backdrop for the Warriors.

It’s in this that we check in on eight burning questions for the 2019 NBA Finals, which start Thursday evening in Toronto.

Can DeMarcus Cousins be effective?

Cousins has been out since Game 2 of the first round with a torn left quad. He could very well be back for the opener on Thursday. The All-Star center just recently noted that he’s healthy enough to play. The question here is how much of an impact the big man can make. Golden State will still value Kevon Looney over Cousins. And for good reason. Looney has been stellar during the playoffs. We’re highly intrigued to see how Cousins will fit in when he does return to the court.

Will the real Kyle Lowry show up?

After struggling through the first two rounds of the playoffs, Lowry stepped up big time in the Eastern Conference Finals against Milwaukee. He averaged north of 19 points to go with 5.5 rebounds and 5.2 assists while shooting 50% from the field. This came after an 11-game stretch to start the playoffs that saw Lowry average just 13.5 points. Toronto can’t expect Lowry to keep up with Stephen Curry from a scoring standpoint. But he must be closer to the performance we saw in the last round than the first two rounds.

The narrative that Curry has struggled in the playoffs because he has zero NBA Finals MVP awards is absolutely ridiculous. Over the course of his past 13 conference finals and NBA Finals outings, the three-time champ is averaging 30.7 points, 7.0 rebounds and 6.2 assists per game. In Golden State’s four-game sweep of the Blazers during the conference finals, Curry averaged 36.7 points — the most for a sweep in NBA Playoff history. The theme? Curry continues to play at an elite level. If this is the case in the Finals, Golden State will win a third consecutive title. It’s that simple.

Is Marc Gasol a playable asset?

After struggling through an up-and-down conference finals, we’re openly wondering whether Toronto can play Gasol the 25-plus minutes he’s seen in the playoffs. Offensively, he averaged just 8.5 points while shooting 34% from the field against Milwaukee. Defensively, Gasol was a shell of his former self. We saw Brook Lopez blow by him on drives multiple times. How is this going to play out against the likes of Draymond Green, DeMarcus Cousins and Co.? It’s a question Raptors head coach Nick Nurse will have to answer early in the series.

How to guard Kawhi Leonard?

Even if Kevin Durant does find his way back for the Finals, we’re not expecting him to guard Leonard too much. Instead, the onus will likely fall on elite perimeter defenders such as Klay Thompson and Andre Iguodala. Remember, Iggy earned the NBA Finals MVP back in 2015 simply due to the brilliant defensive effort he put up against LeBron James. Now much longer in the tooth and dealing with an injury himself, is Iggy going to be up for the task? As it relates to Klay, he’s coming off a first ever All-NBA Defensive Team performance. Does he have what it takes to corral a dude that’s averaging north of 30 points in the playoffs?

How will the Raptors’ rotation look?

Norman Powell and Fred VanVleet played tremendous basketball off the bench against Milwaukee. Serge Ibaka had his moments, but struggled with consistency. Given that Nurse is only going eight deep with his rotation, how these three perform will loom large in the outcome of the Finals. Van Vleet is the most interesting bench player in Toronto. He shot north of 83% from distance in the final three games of the conference finals. Can he continue to get open with a lanky Shaun Livingston and potentially Andre Iguodala guarding him? That’s a huge question heading into Game 1.

When will Kevin Durant return?

The Warriors have already ruled Durant out for Game 1 with the calf injury he suffered in the conference semifinals. The good news? He is traveling with the Warriors to Toronto. This seems to suggest that Golden State is at least hopeful KD will go for Game 2. The Warriors are 31-1 in the past 32 games that Durant missed and Curry plays. While that’s an eye-opening stat, there’s no reason to believe this team is better with Durant sidelined. If he can return early in the series, it would go a long way toward helping Golden State earning a third consecutive NBA title.

Is it really that big of a mismatch?

Golden State opens up the Finals as big time favorites to win another title. What we saw against Portland in the Western Conference Finals with Durant sidelined adds another layer to that. However, the Raptors didn’t get lucky by winning four consecutive games against the NBA’s best regular-season team to make it to the Finals. This team is legit. Kawhi Leonard is playing out of his mind. Nick Nurse compares favorably to Warriors head coach Steve Kerr. Despite being overwhelming favorites, can we really expect Golden State to take this series going away? We’re not entirely too sure.