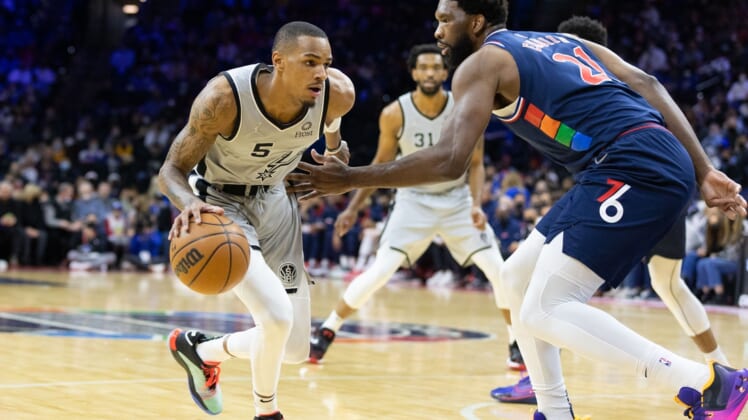 Joel Embiid had 31 points, 12 rebounds and seven assists to lift the host Philadelphia 76ers past the depleted San Antonio Spurs 119-100 on Friday.

Embiid, who went to the locker room before the game went final, reached at least 30 points for the sixth consecutive game.

Seth Curry and Tobias Harris contributed 23 points apiece for the Sixers, who matched a season best with their sixth win in a row.

Matisse Thybulle also had 12 points on 5-of-5 shooting.

The Sixers were fairly healthy with only a couple of key players out — Tyrese Maxey (health and safety protocols) and Shake Milton (back).

Dejounte Murray led the Spurs with 27 points and nine assists. Jakob Poeltl added 17 points and Lonnie Walker IV had 13 for San Antonio, which has lost five of its last six games.

The Sixers built an early 20-point advantage and led 58-44 after Georges Niang’s 3-pointer with 3:11 left in the second quarter.

The Sixers went ahead 71-53 at halftime thanks in large part to Embiid’s 21 points. Philadelphia’s 71 first half points was a season high.

Poeltl had a strong first half for the Spurs with 13 points on 5-of-8 shooting.

Embiid responded with a drive and thunderous one-handed dunk on the Sixers’ ensuing possession.

Philadelphia led 97-80 at the end of the third.

San Antonio closed within 99-87 early in the fourth following a dunk by Poeltl with 9:44 remaining.

Harris then scored in the lane to quickly extend the Sixers’ lead back to 14.

Keita Bates-Diop dropped in a runner with 4:50 remaining and the Spurs trailed 107-94.

Danny Green responded with a 3-pointer from the corner with 3:55 to go for a 16-point advantage.

The Sixers cruised to the victory from there.