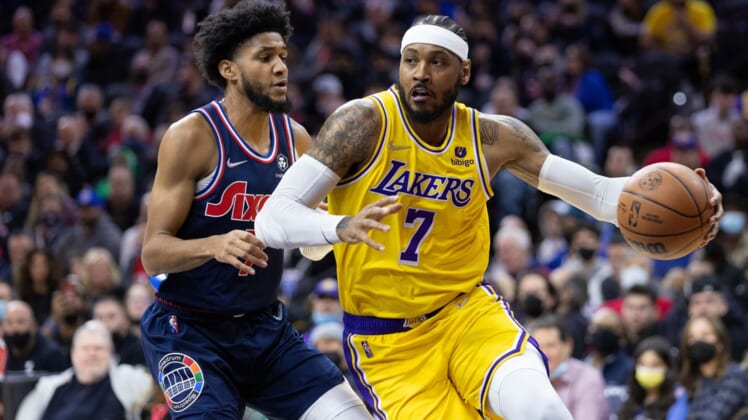 The Philadelphia 76ers continue their pursuit of first place in the Eastern Conference on Wednesday when they face the Los Angeles Lakers to open a crucial, three-game road swing.

Philadelphia scored an important win over East-leading Miami on Monday, 113-106, despite playing without Joel Embiid and James Harden.

Harden missed Monday’s game, the second leg of a back-to-back, for what The Athletic reported as “injury recovery.” Harden flirted with a triple-double in Sunday’s 93-88 loss to Toronto, finishing with 17 points, nine rebounds and eight assists.

Most Valuable Player-candidate Embiid missed Monday’s win with a back injury.

Tyrese Maxey led the Sixers past Miami with 28 points, while Shake Milton came off the bench for 20 points and six assists, and Furkan Korkmaz added 18 points.

“Coming off (Sunday)’s loss, it was almost exactly what we needed,” Philadelphia coach Doc Rivers said. “I’m really happy for Furk and Shake in particular.”

The Sixers also got key contributions from DeAndre Jordan (eight rebounds off the bench), Georges Niang (three 3-pointers in his 15 points) and Tobias Harris (14 points, eight rebounds and six assists).

Philadelphia pulled to within 2.5 games of the Heat through Monday’s schedule, tied with reigning NBA champion Milwaukee and the Boston Celtics.

Wednesday’s trip to Los Angeles kicks off a pivotal stretch for the Sixers. They remain in LA for a matchup with the Clippers on Friday, travel to Phoenix to meet the NBA-leading Suns on Sunday, then return home to face Milwaukee on March 29.

While Philadelphia comes in looking to earn home-court advantage for as long as possible in the upcoming NBA playoffs, Los Angeles aims just to wedge its foot in the door.

The Lakers sit 10 games under .500 with 10 to play, looking to hold off such challengers as New Orleans, San Antonio and Portland in pursuit of a play-in spot.

Wednesday’s contest is a brief home reprieve for the Lakers amid a stretch of seven games on the road. They concluded a four-game road trip with a 2-2 record thanks to a 131-120 defeat of Cleveland on Monday.

LeBron James recorded a triple-double of 38 points, 12 assists and 11 rebounds against the franchise he led to four consecutive NBA Finals from 2015 through 2018, and its lone championship in 2016.

This season, James is trying to keep his current team in the postseason picture. The Lakers are ninth in the Western Conference through games played Monday, one ahead of New Orleans in the penultimate play-in spot and three games up on the last team out of the play-in picture, San Antonio.

The Lakers have won two of their last three but are just 4-10 since Feb. 25. They aim to build on Monday’s win over the Cavaliers, striving to follow a win with a win for the first time since Jan. 7.

“That’s something that our group realizes, that we know that outside people are doubting what we’re able to do,” Russell Westbrook said Monday. “Internally, we’re super confident in our abilities to be able to score and defend at a high level.”