Sportsnaut
May 31, 2021; Washington, District of Columbia, USA; Philadelphia 76ers center Joel Embiid (21) reacts after a play during game four against the Washington Wizards in the first round of the 2021 NBA Playoffs. at Capital One Arena. Mandatory Credit: Tommy Gilligan-USA TODAY Sports

The Philadelphia 76ers showed Wednesday night that they can win a playoff game without MVP finalist Joel Embiid.

But can they win a series?

Head coach Doc Rivers admitted Friday that he likely won’t know until before tip-off whether his injured four-time All-Star center will be available for Game 1 of the team’s Eastern Conference second-round series against the Atlanta Hawks on Sunday in Philadelphia.

But Rivers did reveal some good news: Embiid actually participated in Friday’s practice, albeit on a limited basis, despite the small lateral meniscus tear in his right knee that kept Embiid from the Sixers’ Game 5 clinching win over the Washington Wizards on Wednesday. 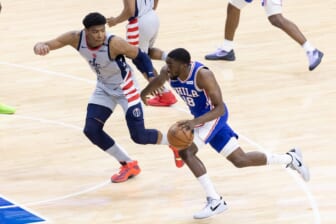 While Embiid, who averaged 28.5 points and 10.6 rebounds in 51 games this season, did not engage in live scrimmages, it did lend hope that the big man could be more day-to-day than gone for the postseason.

“Yeah, he went through a lot of the stuff today,” Rivers said of Embiid, who suffered the injury in the 76ers’ Game 4 loss at Washington on Monday. “I mean, he didn’t do a lot of live stuff obviously, we’re not gonna allow that yet, and so nothing’s changed. You know, he’s gotta go through his treatment. As far as when we’re doing shooting and stuff like that, he looked great.”

The other good news for the 76ers was that they were able to survive Game 5 without their superstar and advance to the second round, although the fourth-seeded Hawks provide a tougher test than the No. 8 Wizards.

Rivers cautioned it was still too soon to tell if he could use Embiid or if he needed to rely on a more up-tempo offense that may or may not be able to keep up with high-powered Atlanta and Trae Young.

Including Game 5 against Washington, Philadelphia has gone 11-11 without Embiid this season.