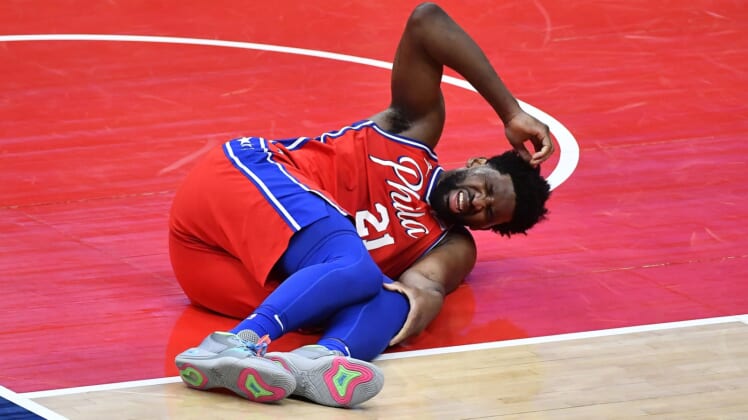 The Philadelphia 76ers got a scare when their MVP candidate Joel Embiid went down with an injured knee in the third quarter of Friday’s 127-101 victory over the Washington Wizards.

After undergoing an MRI, news has surfaced that Embiid and the team averted disaster, yet the four-time All-Star will still miss significant time.

ESPN insider Adrian Wojnarowski provided the breaking news on Embiid’s status, which had massive ramifications for the NBA playoff picture as Philly’s championship hopes hung in the balance:

Shams Charania of The Athletic reported Embiid is expected to miss two to three weeks, which is a big blow in the 76ers’ bid to retain the No. 1 seed in the Eastern Conference.

They’re only one game up on the Brooklyn Nets as of this writing. It’ll be tough to stay on top without Embiid, as Brooklyn’s Big Three of Kevin Durant, James Harden and Kyrie Irving is really starting to click.

All that said, there’s little reason for Philadelphia to rush the big man back. Embiid has lifted his game to new heights under new head coach Doc Rivers, averaging a personal-best 29.9 points per contests on career-high shooting percentage splits of 52.5/42.2/85.9. That offensive dominance, combined with Embiid’s prowess on defense and on the glass, is impossible to replace.

While the 76ers would ideally love to hang on to the top spot in the East, Embiid’s health has to be the bigger priority at this point.

For as talented and singularly dynamic as Embiid is, this latest injury — while coming with an air of relief given that it could’ve been much worse — continues the narrative that’s defined the 26-year-old’s otherwise phenomenal career.

Injuries have plagued Embiid ever since he entered the NBA. After being selected third overall in the 2014 NBA Draft, Embiid missed two entire seasons. He then appeared in just 31 contests in his maiden campaign.

In the subsequent two 82-game slates, there were a total of 37 games in which Embiid didn’t participate. He was out for another 22 last season. That’s a really shaky track record, and doesn’t bode well for his availability. If any superstar needs the “load management” Kawhi Leonard has made trendy, it’s Embiid above anyone else.

If there’s a silver lining to all those prolonged absences, though, it’s that the Sixers are accustomed to Embiid being out for a decent amount of time. They’ve adjusted before, and with Ben Simmons leading the way, they’re in decent hands.

Rivers also hasn’t been the coach under these circumstances, and he’s by all accounts an upgrade over his predecessor, Brett Brown. This Sixers squad is deeper than most teams in years past, too. Beyond Simmons and Tobias Harris, they have battle-tested, championship players in Danny Green and Dwight Howard, who were a part of the Los Angeles Lakers’ NBA Finals triumph last postseason.

Howard stands to see a significant uptick in minutes, which means Philadelphia will need to lean heavily on its perimeter players for scoring production. Look for Rivers to also deploy small ball lineups with Mike Scott at the 5.

Philadelphia ranks third in the NBA in defensive rating, second in steals per game and average a league-high 8.8 blocks per contest. Those numbers figure to take a hit with Embiid out, too, so the Sixers really need to figure out how to weather this adversity prior to their prospective championship push.