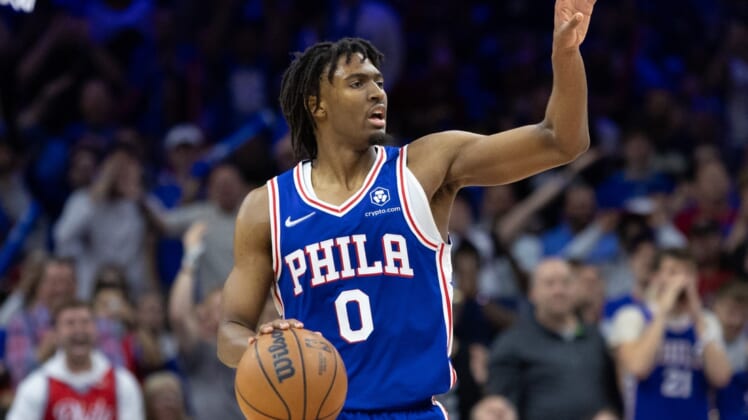 If Tyrese Maxey keeps ascending at this pace, the Philadelphia 76ers likely will make a deep run in the NBA playoffs.

Maxey scored 38 points, one shy of his career high, and the fourth-seeded Sixers blitzed the fifth-seeded Toronto Raptors 131-111 in Game 1 of the opening round of the Eastern Conference playoffs on Saturday.

Game 2 will be played Monday night in Philadelphia.

The 76ers opened as 6.5-point favorites at BetMGM but the line had moved to 7.5 by Monday with 77 percent of the spread-line bets and 88 percent of the handle backing Philadelphia. The line is 7.0 points at DraftKings, where the 76ers have drawn 76 and 75 percent of the action, respectively.

Maxey shot 66.7 percent from the field, and he became one of just 11 players 21 years or younger in league history to score 35 points or more in a playoff game, according to Stathead.

Tobias Harris added 26 points, James Harden contributed 22 points and 14 assists and Joel Embiid had 19 points and 15 rebounds. But Maxey made the biggest impression.

Maxey received multiple standing ovations from the crowd. But looking ahead, he’s focused on one thing — winning.

“I appreciate it, but I think the only thing I’m gonna remember is us winning and that’s all that matters at this point,” Maxey said. “And now this is in my rearview mirror and it’s time to look ahead to Game 2 and get focused and get prepared.”

This series is far from over, and the Sixers realize that fact.

While the Raptors were soundly defeated, it’s still only one loss.

There’s plenty of time to respond, although the 76ers’ odds of winning the series moved from -200 to -400 following Game 1.

“We’ve just got to be better,” Raptors head coach Nick Nurse said. “For us, I think in the first half they had zero (turnovers) and I told the team, I don’t remember a half in nine years that I’ve been here where we haven’t turned a team over at all. Just goes to not enough ball pressure, not enough active hands, probably not enough physicality. Things that you need to do.”

Toronto’s depth is depleted entering Game 2 and the Raptors could be without three players from their rotation.

Scottie Barnes hobbled to the locker room early in the fourth quarter Saturday after Embiid landed heavily on his left foot. Barnes was unable to practice Sunday, skipped Monday’s shootaround and is officially out.

Thaddeus Young left at halftime with a sprained left thumb, further depleting the Raptors’ depth. Young is likewise listed as doubtful for Game 2, along with guard Gary Trent (non-COVID illness). Neither player was a participant at Monday’s shootaround.

For Toronto, Pascal Siakam led the way with 24 points, OG Anunoby added 20, Fred VanVleet had 18 and Barnes contributed 15 points and 10 rebounds before exiting.

They’ll need more to come up with a series-evening road victory.

“I wouldn’t say we lost ourselves. I think we just weren’t ourselves in a lot of areas,” VanVleet said. “I think a lot of what we do is predicated on our aggressiveness and our length and making plays on the ball, causing turnovers, blocking shots. And I think whether that was jitters from some of the newer guys or the whistle or whatever the case may be, we were just a little slow.”

The Over/Under is a 217.5 points at both sportsbooks. The Under has drawn 71 percent of the bets and 67 percent of the handle at BetMGM while the Over has been backed by 79 and 74 percent, respectively, at DraftKings.